Image from PODNetwork, logo for 2015 conference.

Just left my first PODnetwork meeting in San Francisco.  POD is the acronym for Professional Organizational Development, which, I know, sounds like something I’d never be a part of.  But the meeting was about pedagogy, which I am very much a part of.  I’m a faculty member who does not have an official role in a Center for Teaching and Learning, but I am the program chair of the Gender Studies minor; I administer a GLCA grant on Ancient Philosophy Teaching and Research where one component is a pedagogy workshop;  and I’m actively engaged in discussions of pedagogy as many other faculty are on my campus (as part of the academic honesty task force, for example).  All this to say, I was thinking about the discussions at the meeting very much from a faculty perspective.

My first day in San Francisco, I spent with my childhood friend Ei-Nyung Choi whom I met in 6th grade.  Ei-Nyung just co-founded a tech gaming start-up where she and her collaborators spend a lot of time thinking about how their process and their product reflect their values.  I’ve been reflecting (the theme of this POD Conference is “Critical Reflection and Effective Practice”) similarly on how our pedagogical mode of production and the graduates we produce reflect our commitments.  How do our ways of teaching and thinking about teaching influence the way we transform students into students and citizens?  Here’s some brief thoughts on four panels I attended.

The very first panel I attended was the Teaching with Technology session.  I like technology, but I know it’s a pharmakon (a cure that is also a poison).  It can both aid and deter learning, as writing can both help and harm the ability to remember.  But this session made me think about the economic enterprise of teaching.  One way people were talking about motivating faculty to teach with technology or to become experts in teaching with technology was through distributing digital badges.  I’m in the middle of Philip Mirowski’s Never Let a Serious Crisis Go to Waste, so this struck me as a particularly neoliberal motivation – one that makes the self into a credit-bearing asset manager.  A badge is only an incentive if you think you need to accrue further assets to yourself to make you more marketable, a situation which depends on making you feel at risk and in need of appearing more marketable.  If the reason faculty think they need to be good at teaching with technology is in order to be better credit-bearing human capital, then they aren’t thinking about what will improve student learning, or at least, that goal is subordinate to the first.  There’s a tension here between wanting our students (and faculty) to be successful and adopting an ideology that makes students (and faculty) human capital who need to have as many assets as they can to be successful in a precarious market.  I want students to be tech-savvy, but I want to keep in mind the anxiety students (and faculty) have about needing to know the latest stuff just to make themselves more marketable.  I’d like my classroom to be a place that doesn’t foster that anxiety.

The term microaggression has gained more popularity in professional and academic settings.  Derald Wing Sue defines microaggression as “one of the “everyday insults, indignities and demeaning messages sent to people of color by well-intentioned white people who are unaware of the hidden messages being sent to them.”  A term that has less popularity is microresistances, which Sayumi Irey defines as “incremental daily efforts” that help targeted people “cope with microaggressions.”

The panel on Microaggressions and Microresistances discussed a strategy for microresistance called OTFD: Offer observations, thoughts on the observations, feelings about the thoughts, and desires for what should happen.  Of course, this strategy does not necessarily help allies learn not to be bad allies.  We all know that allies can patronize in ways that compound the microaggressions (see Rachel McKinnon’s recent work, especially her article in the forthcoming Routledge Handbook to Epistemic Injustice which she discusses at Unmute podcast).  Allies need to recognize their own privilege as an ally and be cognizant of how ally support can work to serve the ally (look, I’m a good feminist!) rather than the person to whom the microaggressions are aimed.  Tasha Souza from Boise State said at the panel that there is no right way to ally, but I was thinking, surely, there are wrong ways.  Souza urged allies to see that what they say has both a content and relational message, and the relational message is what those with privilege have the epistemic privilege to be ignorant of (as José Medina argues), but is more deeply affecting the worlds and systems they are reproducing.

Keynote: Beverly Daniel Tatum, “Can We Talk About Race?” 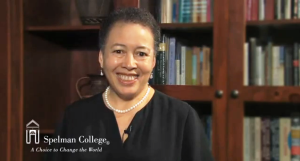 Beverly Daniel Tatum started with this interesting fact: Kids who entered kindergarten in 2014 are the first majority minority cohort in the United States.  Tatum referenced Ta-Nahisi Coates Between the World and Me (reviews of which I gather here) and his realization with the death of Prince Jones that education and wealth do not protect Black Americans from racism, from gross and flagrant racism.  Tatum’s book addresses this point in her book Can we Talk About Race? And Other Conversations in an Era of School Re-Segretation (2008).  The economic situation for people of color is worsening and education affects and is affected this situation.  Consider Spelman, an HBC for women, where Tatum was president until 2014.  In 2002, 30% were Pell eligible.  In 2014, 50% were Pell eligible.  This shift was not a shift in recruiting but in the economic situation of Black Americans in the U.S.

(For more on the societal impact of social and racial make-up of college students: Shape of the River: Long Term Consequences of Considering Race in College Admissions (1998); Source of the River: Social Origins of Freshmen at America’s Selective Colleges and Universities (2006); and Taming the River: Negotiating the Academic, Financial and Social Currents in Selective Colleges and Universities (2009).)

Tatum argued for the importance of more than just token diversity among faculty and students, because students need to see themselves in the picture, in the community.  Not seeing themselves reflected in their community of learning adversely affects their learning.  Tatum’s example for the importance of having a critical mass of faculty and students of color for students to succeed was stereotype threat.  Stereotype threat affects student performance, whether that performance begins well or poorly.  Expressing surprise at a student of color’s good performance is just as detrimental as expressing expectation that they are doing poorly because they are a student of color or a woman.  Claude Steele, Provost at Columbia University, tells a story about stereotype threat in Whistling Vivaldi: How Stereotypes Affect Us and What we Can Do of how feedback affects black students willingness to resubmit work.  When feedback on papers was given to black and white students with some positive and negative feedback, black students were more likely to resubmit than when the feedback was straight negative feedback (but still less likely than white students in both scenerios).  When what is called “Wise Feedback” is given, which comes in clear announcement of high standard, clarity of the problems, high expectation that student can meet the expectation, black students were more likely to resubmit than in any other group.

Tatum argued that implicit biases and stereotype threat and all these issues can’t be solved without addressing the collective investment white people have in maintaining white supremacy.  As we know, people benefit from racism even if they do not hold or think they hold racist positions (see Racism Without Racists by Eduardo Bonilla-Silva).  We have to keep asking ourselves how we are reproducing white supremacy in the classroom, in how we lead discussions and how we grade.

Blogging about pedagogy is a thing I’ve done here and here and here.  I’ve also blogged about blogging.  You’ll see from those posts that I think blogging about teaching, travel and life in general motivates critical reflection.   But I remain aware that for those who lack power IRL going online magnifies stereotype threat and intensifies concerns about “saying the wrong thing.”  White women and people of color are overscrutinized and gaslit online, while white men are able to further accrue credibility and respect through their online exposure.  (I’ve been thinking that the best thing that white men in philosophy (my field) could do is get off line and give space for others – that’s not entirely irrelevant for best practices discussions: we should be asking if we are expanding into space that crowds out other voices.)

I wanted to learn from the people who run “The Flourishing Academic” blog because I am interested in blogging best practices. I was a little surprised that the people discussing blogging about teaching and learning hadn’t confronted these kinds of problems, but the panel did help me think more about how the anxieties of presenting your ideas to others, of asking questions and giving comments, worrying about whether you sound like an idiot are at work in students blogging for class, especially when they experience tokenism and stereotype threat in class IRL.

I thought of the start up Ei-Nyung Choi founded and the work they are doing developing a game that she and her collaborators see as a way of extending and multiplying social interaction for those who are already engaged with one another.  Blogging and online interaction in its best forms seems to follow the same model of further developing conversations begun IRL and engagements IRL are then enhanced by the online engagements.  But again, the power dynamics don’t disappear in those engagements, and might even be intensified.

Throughout the conference, I found myself wondering if I was the target audience for the discussion.  Some of the panels discussed teaching strategies and research about best teaching and learning practices.  But many were talking about how to organize programs to teach faculty.  I found myself grateful to be at an institution that involves faculty in the work of teaching and learning, but I also realized that doing it well would take a lot of time (learning the scholarship, serving specific faculty needs, coordinating with IT and with various committees doing teaching and learning work).  I did think recognizing that faculty have expertise in various areas of teaching and learning is critical for getting faculty buy-in, or maybe just respectful of faculty expertise. Finally, I think that supporting faculty research development at a small liberal arts college is a part of good teaching and learning practices.  I was especially glad for an occasion to reflect further on the ethics and politics of producing the next generation of thinking citizens, which is to say, the ethics and politics of pedagogy.