Nafplion: The Leisure to Think 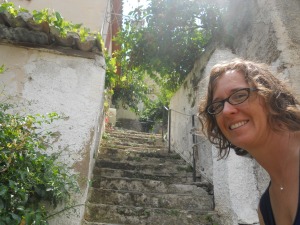 Thinkers from Plato to Marx remark on the need for leisure–for leisure time won by having one’s expenses covered and necessities provided–to engage in the life of the mind.  After the busy work of investigating Athens, we have now settled into the leisurely place of Nafplion where we have plenty of time to think.  I’ve set two thinking projects for myself: one is a paper on Arendt and Aristotle that I’m giving at the American Political Science Association (APSA) at the end of the summer and the other is a piece on Aristotle’s conception of government, politeuma, which I have presented a number of times and am now ready to send it out for publication. 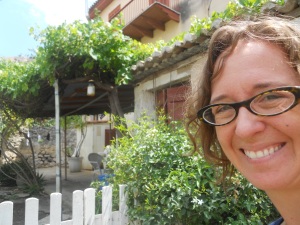 I am particularly excited about this Arendt project since it has been rattling around in my brain for six or seven years now.  I’m also looking forward to presenting my work at the APSA because many of the thinkers whose work on Aristotle’s Politics I appreciate most (like Jill Frank and Mary P. Nichols) are housed in Political Science departments.  I myself earned a BA in Government, the department through which I was exposed to continental philosophy so I have a particular affection for political science as a discipline.  I think I’m finally, finally, figuring out Arendt’s The Human Condition, thanks to a more leisurely rereading of Dana Villa’s section of Arendt and Aristotle in his book, Arendt and Heidegger: The Fate of the Political, of Jacques Taminiaux’s “Arendt and Rome,” and of Jussi Backman’s “The End of Action,” which you can read here.  I’ve talked to Jussi about his reading before, but finally, just yesterday, I realized the force of his point that Arendt is criticizing action in Aristotle as ultimately teleological by defining praxis or action herself in terms of new and open-ended beginning.  I still think a turn to physis in the Physics will show how the concept of praxis can illuminate the sense in which physis remains at work in the activity that is itself the end without becoming oppressively teleological

precisely because natural things remain at work, holding their archê or source together with the end.  But Jussi’s reading, which he develops with the help of Villa and Taminiaux, is forcing me to be much more careful about my analysis of praxis and physis.

I was saying just yesterday how much writing and thinking is a risk: one sets herself a project and remains unsure whether it will come to fruition or to naught.  One must take a leap, declare that she has something to say and then hope that indeed she does.  This is especially the case when, as in this scenerio, you send an abstract out six months before you are to give a paper and then you begin to wonder whether you can actually make the argument you hoped to make.  It’s a roller coaster for me: I wonder from one moment to the next whether what I am reading is disastrous to my argument or instead forces me to clarify and crystallize.  That I sometimes want to stay in bed to avoid sitting at the computer is testament to how much writing requires courage.  So I am pleased to have friends in these other thinkers I read who challenge and push and join me in the conversation.

But what I’m really pleased to have is a place of leisure for thinking.  This first picture is of the stairs that go 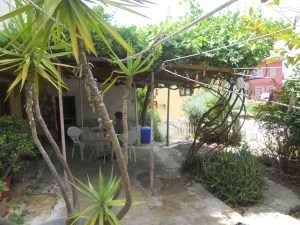 up beyond our place.  If you turned left right there at the bottom, you’d be on our terrace.  The second picture is of the gate onto the terrace.  To the left of where I’m standing in that picture is a bush that currently has three cats who are either fighting or well, the other thing, and they are making such a ruckus of it, morning, noon and night.  We are somewhat dismayed at the difficulty we are having judging whether they are enemies or lovers.  Maybe both.  In any case, we are really trying not to be voyeurs.  The next picture is of the freshly-squeezed lemonade I’ve been making each morning from lemons picked from the lemon tree behind it.  The picture above is of the view from the lemon tree side of the porch, looking at the white gate at the entrance.  Here we sit working away under our canopy.  Looking out at this view.  So like I said, the life of leisure.  I assure you, we’re working hard.

Tags: APSA, Arendt, Greece, Nafplion, writing
From: Philosophy, Travel
← Greek Graffiti: But hey, isn’t all writing illicit?
Delphi, Part I: The Gods Must be Near →
No comments yet