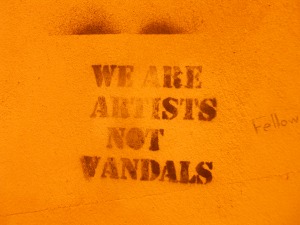 Yesterday we took the bus down to Nafplion on the peninsula that juts out from the northeast coast of the Peloponnese.  It’s a gorgeous town that still retains its 19th century Italianate charm, as our host in absentia, told us.  The place is rustic and again, to quote, “close to nature.”  But I spend a lot of time thinking about nature so I’m pleased to be close to it.

I’ve been writing some fairly heady posts, so I’m taking this break to share some pictures of graffiti that I took in Athens and a couple here in Nafplio.  What?  No, long diatribe about how all writing is illicit and therefore of the structure of graffiti?  That was just a teaser.  You’ll have to fill out that argument on your own.

This first one is from a wall in Nafplio and it seems to capture the spirit of the graffiti artist. 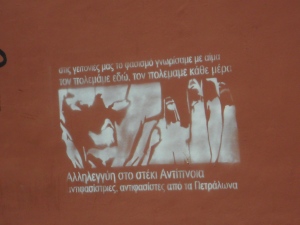 This stamp on the wall of the Petralona metro stop is in Greek so I don’t know what it says, but it was the first graffiti I saw in Athens–no, not true, there was a lot of graffiti on the metro from the airport, but this piece gave the impression that some sustained organization had gone into it, which I came to see more of as we walked around.

When I see graffiti, I tend to think that it is an indicator of blight.  But European graffiti often has a more explicit political meaning to 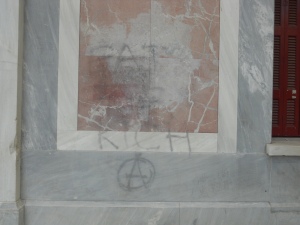 it and is not a signal that a neighborhood has gone to waste, but that th 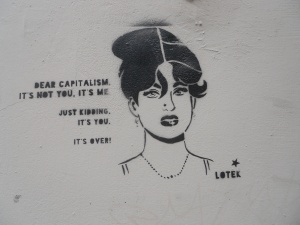 e people have something to say that they feel like is not being heard through more official channels.  So we saw a whole series of political stamps.

The first one read “Eat the rich,” and the second one is a ‘Dear John’ letter to capitalism that we saw on the wall on the way to Petralona metro station.

Perhaps my favorite political graffiti, though, was this one, which with reference to May ’68 speaks to a whole set of intellectual and political forms of resistance that one could argue the current philosophical left remains nostalgic for.

Then there were these stamps that I found whimsical and befuddling.

Someone went to a lot of effort to make the dirty joke out of a English subway sign. 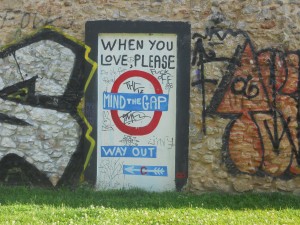 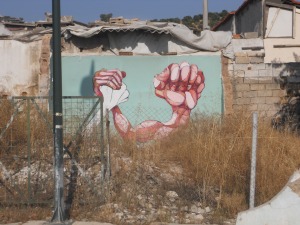 back to our place in Athens on the road that runs between Philopappou Hill and the Acropolis.

Tags: graffiti, Greece
From: Travel
← Greece for the Greeks?
Nafplion: The Leisure to Think →
No comments yet