Delphi, Part I: The Gods Must be Near

Legend has it that Martin Heidegger was walking in the Black Forest with friends when he came across a country shrine and crossed himself.  Knowing that Heidegger had given up his Catholicism, the friend asked what he was doing.  Heidegger responded something like, “Many have prayed here, the gods must be near.”*

We arrived in Delphi and looked over the valley that cuts through the mountains up to the water and thought, the gods must be near.  This first picture is the view from the place we had dinner last night, which is also pretty much the view from our hotel room.  Today we trekked up to the Temple of Apollo where the Oracle of Delphi, who was called a Pythian in light of the story that Apollo replaced the Earth Goddess, Ge or as Hesiod

later calls her, Gaia, when in the form of the dolphin, he defeats the snake (Pythos) who was the son of Ge / Gaia.  While the landscape holds me in awe still, the temple ruins didn’t give me the same sense of the nearness of the gods.  Though indeed, many have prayed here.

I am still processing the encounter at Delphi, so I am going to post several times about this place.  My traveling companion read aloud half of Plato’s Apology as we considered how the Delphic Oracle might be considered responsible for launching the western tradition of philosophy insofar as such a tradition is traceable to Socrates and Socrates considers himself to philosophize in obedience to the god.  I also want to write more about the history and strength of the Delphic Oracle as manifested in the global supplication to this place in the form of treasuries from as far as Ionia, Syracuse and even Marseilles.  This is a picture of the Sphinx of Naxios, which stood on a 12 meter high Ionic column outside the Temple of Apollo.  People were coming to the Oracle up through the 4th century CE.  The relative strength of the Oracle and the waning of that strength in light of the defeat of much of Greece by Macedonia return us to the question of the relation of religion to politics which I also plan to write more about. 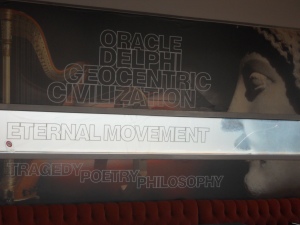 Sign in the coffee shop where we had breakfast.

The mountains surrounding the Temple of Apollo where the priestess of the Oracle would sit.

Scully maintains that the Greeks were able to blend their architecture into the landscape “because of a religious tradition in which the land was not a picture but a true force which physically embodied the powers that ruled the world (3).  Scully encourages the student of ancient Greek architecture to appreciate how the meaning of the sacred temples was in the form and not distinct from it (6).  Indeed, Scully binds the question of the relation between form and site to the “human identification of the self and of reverence for that which is outside the self, of acting alone but at the same time being at home in the world…It is with these issues that Greek architecture deals, as it balances the man-made and the natural,  nature and the human will. Indeed, Greek temples and their sanctuaries express concepts which embrace the whole of the larger issues of life as the western world has most realistically come to know them, since they were the result of an attempt to grasp reality whole, not to transcend but to understand the apparent truth of things.” (7)  Thus, the Greeks set up consider both the earth and the sky when they place their “oblong square building,” (24) which reaches across instead of in a circle as nature was felt to be, stretching our focus through that focus of the world up to the sun even while disrupting it in a way that found a place for human beings to traverse it.

All this to say that on Scully’s account, the site at Delphi is particularly significant for its role in the confrontation between the more Minoan goddess of the earth and the later Mycenaean gods of Olympus, which he maintains can be particularly felt here at Delphi.  Scully writes:

The Temple of Apollo set against mountains from the other side (opposite the picture above).

Yet, as mentioned earlier, there was an inherent contradiction between the concept of the conquering war chief and the worship of the goddess. Leaving aside the question of a conflict between matriarchal and patriarchal systems of society, a question which was later to fascinate the Greeks and which certainly fascinates many mythographers now, the problem can be posed again in relation to our own subject of landscape use. That is, the worship of the goddess, as read in Minoan sites, was essentially one of peace, in which the rhythms of the earth directed life, not the aggressive attitudes of men. Thus the Minoan palaces were more or less on low ground and unfortified, and the symbols of the goddess were on high. To her was given the proud place and the major throne, and the king took a secondary role, perhaps as did the stripling son or suitor who is the consort of the goddess upon some Minoan gems. In the worship of the dominant female deity, as developed more embracingly on Crete, there was little room for the aggressive restlessness of male ambition and mind. The male was son and lover rather than lord. The Dorians were to refuse to accept those conditions–being willing to forego with them the hidden promise of immortality they held–and to attempt to subjugate the Mother to their own lordly Zeus. The Mycenaean lords, though actively wishing to worship the goddess, as we have seen, were constantly being driven, by their own lordship and by their active competition with each other, toward the goddess’ place. 36

And later on Apollo: 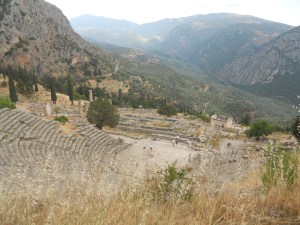 View of Temple of Apollo and Theater of Dionysius from above. Note how the mountains shape the space.

Apollo’s most important places tell us that he was usually invoked by the Greeks whenever the most awesome characteristics of the old goddess of the earth were made manifest. Wherever her symbols were most remote, tortuously approached, and largest in scale, and where they seemed to open up the interior secrets of the earth most violently or most dominated a thunderous view, there the temple of the young god was placed, and generally so oriented as not only to complement but also to oppose the chthonic forces. Clearly enough, Apollo is intellect, discipline and purity-central, as so many modern writers have insisted, to the archaic formulation of some of Hellenic society’s most nobly human ends-but, equally clearly, the site tells us that Apollo is those qualities embodied in an implacably heroic force. Yet he, too, cannot come to grips with the earth without being touched by it. Therefore, god of the sun though he may be and, like his sister Artemis, incorruptible and a guardian of gates, he still takes on some of the darkness of the old cavern as he assumes the oracular power. Apollo’s sites thus tend to embody grandeur, strife, and the development of complex character. True enough, they seem primarily to celebrate, with archaic action and directness, an arrogant intrusion of the shining Hellenic male god into the central strongholds of the pre-Hellenic goddess. At the same time, many of his sanctuaries would seem to have been so organized  as to create, out of that basic conflict, a conscious and humanly perceptible drama, in which the god’s code of “Nothing to excess,” which his terrible victories made more necessary to him than to any other, is finally shown to emerge in the teeth of nature’s irrational power.  Thus in many of Apollo’s sites the abstract, mathematical order of the Greek temple is made to contrast most sharply with the roughhewn masses of the earth, dramatizing at once the terrible scale of nature and the opposing patterns which are the result of disciplined human action in the world-while, within,the secret darkness also received special attention.100

Here’s Scully on the approach into Delphi:

Past this place of the daimonic hero and of the goddess’ snake which is not killed but instead assumed by Zeus in the fullness of his nature, the road to Delphi winds itself snakelike among the mountains, which close around it. After a time they begin to open again, and the way,passing the high perch of Arachova, comes finally to a spot from which the mountains can be seen yawning widely open ahead in a great V. Beyond this lies the plain of Krissa, the waters of the gulf, [these can be seen in the first picture above] and farther mountains across the plain. No sign whatever of the Delphic sanctuary can yet be seen. Advancing further along the shoulder of either mountain, one comes finally to the spot across from which another horned cleft cuts through the mountain barrier on the south beyond the Pleistos. In all likelihood this is the gorge of the nymph Telphusa, who resisted the assumption of her sanctuary by Apollo and was punished by him through the overthrow of the mountain upon her. Yet an earth goddess still haunts her place, since, fronting her cleft, lies the sanctuary of Athena Pronaia.
The two temples of Athena, the two treasuries, and the tholos are set in a row facing south upon a narrow
plateau which confronts the double peaks, with the cleft between them, across the valley. The dance-like rhythms of the buildings’ placement causes the eye to move across them toward various points in the opposing formation, now toward the peaks, now toward the cleft. The feeling is of being embedded in earth forces at this point, like Telphusa herself under the mountain. 110 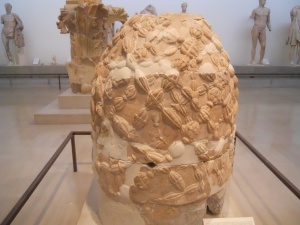 The Omphalos stone that was set on the way to the Temple of Apollo.

If I’m amazed by anything here it is the capacity to see the natural world as a shape that, like a work of art, can pull our eyes upward and back and point them precisely where the artist wishes.  The Greeks didn’t think there was an artist behind that nature; they thought nature itself was full of gods.  Here, it’s not hard to see why.

*I’d be interested to know the source of this story if any of my dear readers know it.