Buying a House: The Home Improvement Project That Should Not Have Been

I think it was last March now that I looked at the bricks on the street-facing front of the porch and thought, that paint is practically coming off of the bricks on its own-I bet I could scrape it down to bare brick! Jeff was away so no one was here to talk me down. I found a scraper and got to work. Forty hours and several months later, the first layer of paint was off, only to discover an unscrapable layer underneath as well as a wall in need of a serious pointing job. I should have left it alone.

It turns out that the bottom layer can be taken off with a serious power-washing effort and some potent chemicals, but this approach destroys the surface of the brick. That might not matter so much in an internal brick wall, but external brick walls need that surface to protect them from moisture and wind. 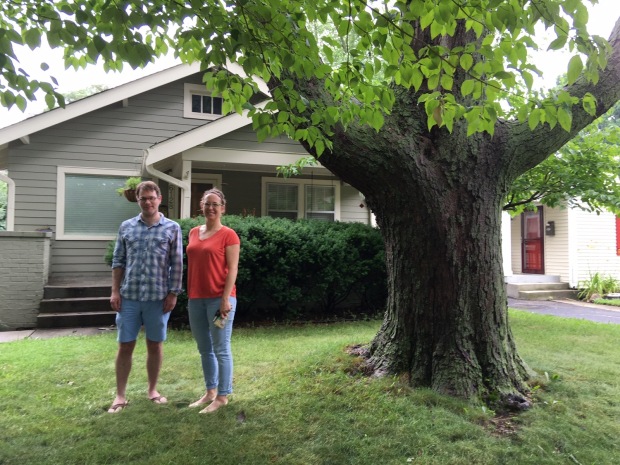 The wall behind the bushes, that I seriously cut back last winter and they never grew back so I had them pulled out, is the one that I repainted. Now I know why they had bushes there!

My consolation was that the brick wall really did need to be repointed and I would never have known the extent of the problem unless I scraped. Rest assured, I am not pursuing this further information on the other walls around the porch, though I suspect at least one is probably in the same shape. I considered pointing it myself, but by this time it was early August and I was trying to get some projects finished before classes started and prep for the coming semester. So I posted the job on Angie’s List. I had never done this before. You describe the job and Angie’s List makes it available to contractors who can do the work. I do not think that this is the best way to find a contractor, as I think it tends to send out your work to people most in need of it, which I think might be the people who aren’t getting work through word-of-mouth, which is to say, people who other people aren’t recommending to their friends. I received a call from a contractor who offered a free estimate. On the phone he was very friendly, which is fine, but it felt creepier when he got here and wanted to chat more than seemed comfortable. When he showed up he had very bloodshot eyes and one looked like a black eye, which also made me a little nervous. I don’t even think any of this would have shown up to my consciousness if the estimate hadn’t gone the way that it did. He started looking at the wall, then he went to the side wall and noted how it was buckling and said that this buckling was probably causing the siding to rot and it would need to be redone as well. Then he left me a quote about $800 for the front wall and more than 4 times that to fix the issue with the other wall that he insisted was a serious problem. He didn’t itemize the estimate to explain how he reached these numbers. Before he gave me the estimate he was talking about how he would come to the numbers and said, well, I have a team of two or a team of four, you probably wouldn’t need that many, but even if everyone isn’t working, they all have to be paid. I mean, I’m here for labor but this explanation sounded like the guy was trying to play me, rather than treat his workers fairly. This short little new homebuyer, what did she know? What I know is that my dad was a contractor and I can tell when someone is trying to make money off of me rather than do the work I need.

I thanked him kindly and called someone else. They had a salesperson come out, who took a look around. I told him what the other guy told me about the side wall and how it needed to be redone because it was likely affecting the siding. This guy said that the buckle could have happened over the close to one hundred years that the house has been standing. I should take a photo of it now, he said, and see if it shifts year to year — that would be a sign that it was a problem. But if it was just a slow buckle, it probably wasn’t holding water that was damaging the wood siding. Now that’s my kind of contractor. Also my kind of mechanic. Tell me why the problem is not really a pressing problem and you have a customer for life. He counted the number of joints that needed to be redone and gave me a quote that was half of what the first guy gave me even including some other joints on the far wall.

They came and did the work and have now been harassing me to write a review for them. I was waiting until I had repainted the bricks to get up close with them and see how good the work was. I just finished the painting today. They did an ok job, but they could have mortared more joints than they did. Maybe that was why it was so much cheaper than the other guy. I’m a little afraid that I was using primer as a kind of sealant when that really should have been mortar but at this point, I’m just happy it’s done. 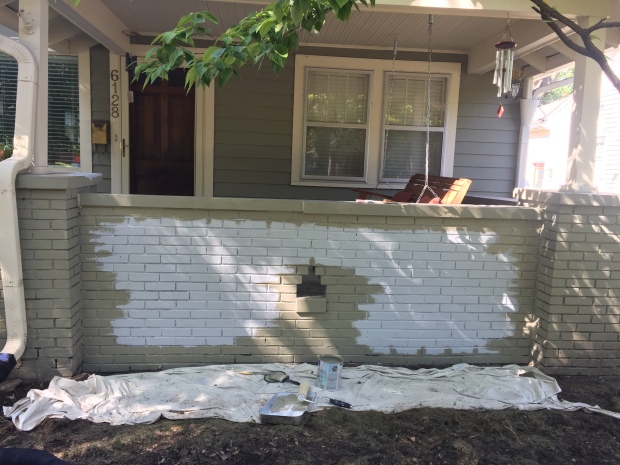 I’ve been working on this house since we bought it while working on a project on matter and form in Aristotle’s biological and theoretical works. I keep being surprised, time and again, though I shouldn’t be, by the resistance and character of material. On a material level, bricks resist being painted. This fact should be reason enough for no one to ever paint bricks. I blame Jo and Chip Gaines. I blame HGTV. I blame anyone who ever thought bricks were unattractive. Painting bricks sentences bricks to another life, a life they were not meant to live. Painting bricks means that bricks will forever have to be painted. It means also that bricks will resist this form of life in new ways every time. Don’t paint your bricks. But if they were painted when you got to them, know that painting them well will require a kind of care and vigilance that seems overstated for the work and the benefit of having nicely painted bricks.

I’m finished now, but my place of improvement is really just back to square one. The square one I wanted to get to was the square before the previous owners ever painted the brick. That’s the real reason this job never should have been done. I have heard people say this about home-owning, that you feel like you are just running to stay still. That’s pretty much what concluding this job has involved. Now, to stand still until I can think of what to do next.

Tags: Angie's List, HGTV, Home-Buying, Jo and Chip Gaines, painting bricks
From: Personal
← Aristotle in the Active Classroom: Group Activity 2
In My Feelings: Why it is Affectively Hard to Acknowledge One’s Own Oppression →
No comments yet