A Slovenian Feast at Gostilna Skaručna

Last Wednesday, we went with friends for a fifteen-course traditional Slovenian meal in the small town of Skaručna outside of Ljubljana. Gostilna Skaručna has been run for forty years by the same family, one brother runs the restaurant and the other the attached inn, Klub Gurmanov, where we had an amazing breakfast (if you go, the restaurant takes credit cards but the inn only takes cash).

We were in Ljubljana for a friend’s art exhibition and for a lecture on the theme of the exhibition, “Heavenly Beings: Neither Human Nor Animal.” The opening was Tuesday. We went to the lecture on Wednesday, which happily for me referenced some of the work on Aristotle’s work on animals, and then when the lecture was over we trekked out to Skaručna. After settling in at the inn, we walked to the restaurant which is in the front part of the property. We sat outside for an appertif and the first course of a cucumber and yogurt dish. The appertif was gendered — women were given a short glass of a red pulpy drink and men a beaker full of a strong liquor. We decided not to raise any questions. But the proprietor did explain that the men’s drinker was much stronger. After the appertif a pitcher of honey beer was brought to the table. I’m gluten-free, and they were accommodating (they brought me gluten-free bread and wine in the place of the honey beer).

After a leisurely beginning, we were invited inside. Our party of seven–three Slovenians, one Canadian and three Americans–was big enough to be able to enjoy this meal which requires a decent-sized party for it to be worth it, but small enough to share one conversation. The wait staff brought wine with each course — the wine changed after the soup courses. And a traditional lemonade and a water, which the server called, “decoration.”

The first course was a beef tongue with parmesan cheese. It was sliced so thin it seemed to melt in your mouth. We tried to think about pacing. Just several days before we had a long conversation about the different ways our families treat food. My family always considered cleaning not just your plate but the dish as a whole as a virtue. My mother would try to push second and third courses by saying, “Whose going to do their duty?” I however have been working on leaving food behind, on my plate and in the serving plate, to eat just what I enjoy. We collectively worked on leaving things on the plate, more to have room for the courses to come than for any kind of restraint. This meal could not be described as restrained.

After the tongue came salads and soups. A gluten-free spinach soup was brought to the table for me — it had more of a broth than the milk-based base of the glutenous spinach soup. There were three soups in all. 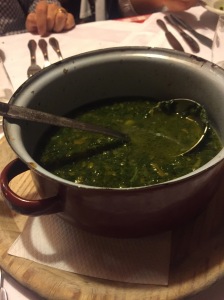 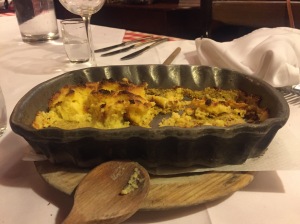 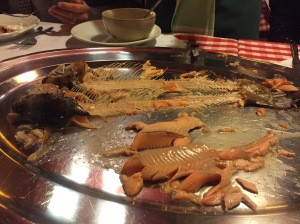 The cheese polenta that followed was so good. The best part was the crust we scraped off the bottom of the pan. But the most incredible part of the meal, the part of the meal I can still taste in my mouth, was the trout. The server brought out two beautiful trout on a platter and then deboned them right there on the table in a performance that was as efficient and entertaining as the fish was moist and full of taste. Using rubber gloves she felt through the flesh to remove all the bones. The fish is steamed and smoked so it is full of flavor without losing its moisture. After dinner they showed us the box they use to smoke and steam it, a process I haven’t quite figured out because it seems like the smoking would be transformed into steam by the steam. I think they must have to do one process than the other.

After the fish, they brought out a box, and opening it, revealed the last of the main courses, the veal knuckle. They carved the knuckle in front of us and then added the meat into a pan of fried potatoes and quickly cooked the meat in with the potatoes and served each person a course of a smallish piece of meat and some potatoes. As much as I thought I wouldn’t be hungry at this point, I was happy to eat.

Finally, the last course was a pastry but they brought me fermented cherries in a syrup, which was good without feeling like a rich and heavy dessert. After this course, they gave us a tour of the kitchen. They are still using the same equipment you would find in a traditional home kitchen and most of the same equipment, which they fix and build themselves. For a last course, they brought a liquor. The whole meal was delicious. It made me think that pleasure is the good.

The meal cost €85 plus wine, so the total was €95 before a nominal tip. It’s a good idea to make a reservation and to bring a sizeable group. 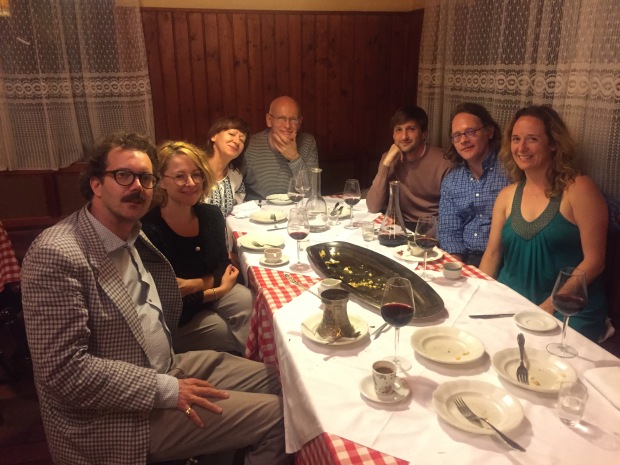 Tags: gluten-free, Gostilna Skaručna, Skaručna, Slovenian cuisine
From: Travel
← Walking to Plato’s Academy
Greece is Burning in More Ways than One and Its Neoliberalisms Fault →
No comments yet