Today we walked from our place in The Mets to Plato’s Academy, about five kilometers – it’s about 1.5 miles from the Agora. My colleague Lew Cassity is working on a book on Plato’s Laws and wanted to get a sense of how the walk from the Agora to the Academy would feel. We stopped off at the Kerameikos, where the Sacred Road that led to the Academy begins, and then we walked up Platonos all the way to the Academy.

When I was here in 2014, we took the bus out there and it seemed to take forever. I think it probably took as long as our walking it this time. In 2014, I remarked how unmemorial like the site is, less so even that Aristotle’s Lyceum. Like I said then, I guess, as Thucydides wrote, famous men have the whole world as their memorial; they don’t need statues. 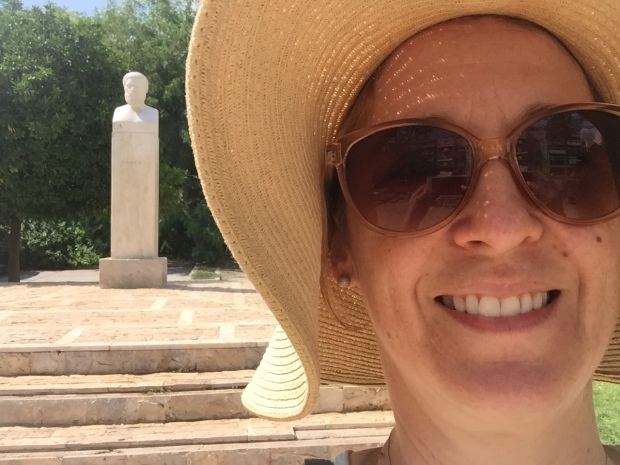 Lo and behold, today there are statues. Not just statues, but a little museum, the Digital Museum of Plato’s Academy. Now it’s true that the place remains woefully unmarked — I couldn’t even find the same site of the Academy that I found with the help of the Athens Blue Guide in 2014. But the community seems to have come together to form a modest museum and to mark the place.

In the museum, they’ve put together a replica cave complete with places for prisoners to sit looking straight ahead (no chains though) and a screen projecting images on it. The images of images go pretty far down here.

Another room has an illustrated animated cartoon of Plato’s Symposium, with some pretty spectacular renditions of Socrates and Alcibiades. This image pretty much captures Socrates as Silenus.

Also surprisingly fitting was the replica of Cy Twombly’s “Five Greek Poet and a Philosopher.”

A short film documenting the museum project at the end of the exhibit includes a couple people bemoaning the lack of interest in Plato in Athens. If there were anywhere else, one local says in so many words, they’d have made a whole production of Plato. Why not here? Without any public support, the community went ahead and put together a pretty decent display, including virtual walkthroughs of the grounds and these short films on the cave and the Symposium. There’s a whole wall at the end that is a graphic of famous books on Plato, including many that I know well–Terence Irwin, M.M. McCabe, Gregory Vlastos, Debra Nails, Leo Strauss among many others. Maybe this is a new thing to aspire to.

Lew’s project includes some consideration of the history of the Academy in part to suggest that our view of “the academy” as a place separated from the distractions of the world. If nothing else, the current site certainly contributes to that sense. 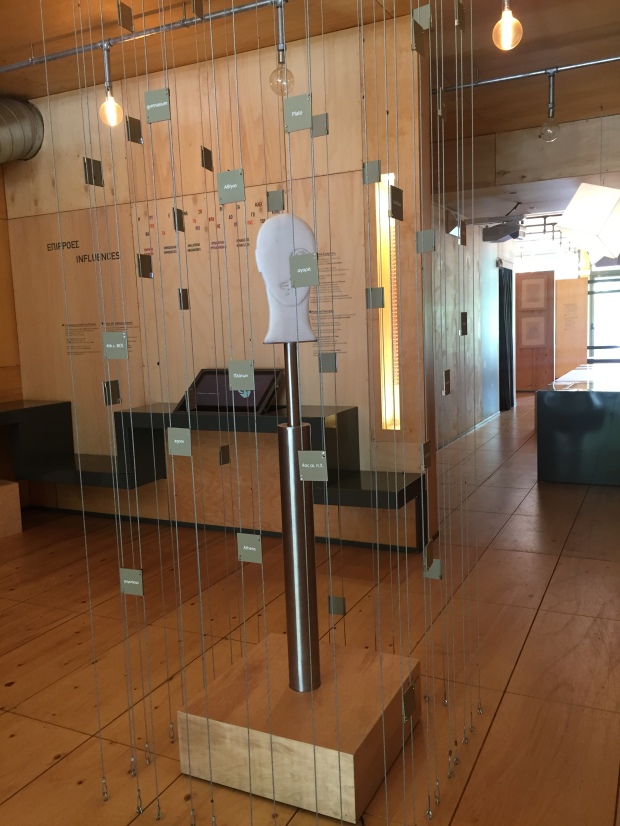