The City as Canvas exhibition first went up at the Museum of the City of New York in 2014.  A large portion of the exhibit is of work that Martin Wong collected in the late 1980s and 1990s while living in New York, including graffiti artists’ black books of sketches and a series of photographs from subway trains around the city (more on the backstory including how Wong built his collection by paying graffiti artists for their work can be is here).

I am glad that this exhibition was in Indianapolis.  Today is its last day at the Indianapolis Museum of Art at Newfields.  I have to say that first before I pronounce on how it produces the sense of New York and graffitied New York as a strange and foreign culture where the natives did things like (gasp) spray paint on public property.  They even had a display of graffiti vocabulary to drive home the “look at the strange natives” vibe.  Growing up in Philadelphia in the 80s and the 90s, I find graffitied cities to be the backdrop of city life. I remember starting to recognize tags and seeing how much certain artists got around town, and thinking, it was like a secret code, because it was.

Graffiti is the expression of resistance from artists who assert themselves as part of the city that ignores them.  Graffiti takes back the common spaces that are supposed to be for the businesspeople and the tourists.  And it expresses the political sentiment of an entire city. 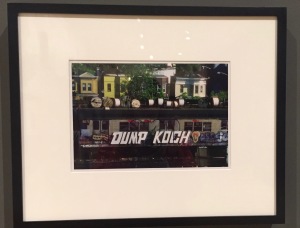 “Stop the Bomb,” painted on a train by Lee Quiñones in 1979, is one of the murals being displayed at a Lower East Side gallery.

One photograph that I wasn’t able to get a picture of was of a man on a subway with the doors opened in a car completely covered in graffiti–tags on the inside and pieces on the outside.

We have Guiliani to blame for getting rid of much of the graffiti in New York, and the notion that it feels safer without it indicates that some parts of the city feel safer when it paints over the voices of those who had to take to the walls to be seen and recognized.  The exhibit presents this “isn’t this interesting?” attitude by putting the graffiti on walls in a museum where it is safe and manageable, and not something that might characterize the city anymore.

Originally painted on a handball court in 1978 by Lee Quinones.

The subject of what happened to graffiti is the subject of much of the graffiti in the exhibit.  Even though the vibe of the show is a kind of sanitized cityscape where what was once viewed as blight becomes less threatening in the halls of a gallery, it also plays on a kind of nostalgia.  The listening devices for recorded messages from graffiti artists were payphones.  There were scratch-and-sniff stickers and Garbage Pail Kids cards on the walls where the payphones were.  There were photographs of people in airbrushed t-shirts, which were all the rage when I was in middle school. 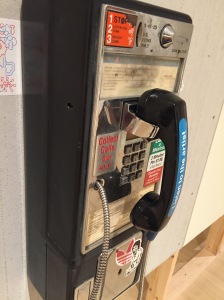 Zephyr’s description of getting followed by police and arrested for graffiti.

I especially appreciated the Adidas sticker and the information for how to call Mexico on this payphone.  When you picked up the receiver you could hear the recorded message from Zephyr where he talks about being pursued by police for graffitiing.

Painted Adidas Superstars on display with tag on the sole.

On the one hand, the show makes the case for accepting graffiti as a form of art.  The black books, the photographs, the history, and many of the pieces are important and impressive. On the other hand, the sanitizing effect of this case made in an art musem serves to strip graffiti of its power.  In one part of the show, LED spray cans were available that you could “spray” onto the wall that had the image of a subway car to try to make your own mark.  Now with no risk.  Seems to miss that the point of graffiti was it wasn’t sanctioned, it wasn’t approved of, it wasn’t safe.  And its appearance testified to the willingness of its artists to persevere regardless.  The “City as Canvas” points to how the canvas has been restretched through gentrification to temper the art of underground voices so that it might be seen as less caustic to those it so appalled when it characterized the city.

Tags: City as Canvas, graffiti
From: Art
← Which America First?
On Christianity and the Loss of Mourning →
No comments yet