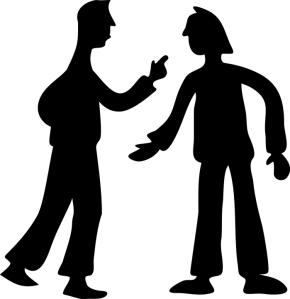 At least once a year, I teach a small upper division seminar course that is heavy on discussion.  I have been working on strategies to get students to talk through issues that their classmates raise rather than to jump from one free associated comment to another or to think discussion is just asking their classmates to explain things.  Last summer I saw some movie about an improv troupe in which they did this exercise where one person started with a name and then the next person had to say something related to that name and the next person something related to that and so forth.

It occurred to me that this exercise could help students think about how to listen to one another and to respond in related ways.  During the third week of class, after we had tried to discuss and ran into the typical problems–students don’t pursue issues after the first response, students don’t directly take up issues their classmates raise, students jump quickly  to other issues and remain on the surface for all of them, or students speak just to ask clarifying questions rather than to build on ideas–I started class introducing this game.

One student says a word, the next student has to say a related word.  You go until people stumble.  Then, and this is crucial, you reflect on how things went.  The first time my students did it, they said wildly disconnected things in the moment of pressure.  Sometimes they just negated what the previous student said.  Happy–not happy.  We talked about how this made continuing the game more difficult.  Then we talked about what that teaches us about what is required to have good discussion.

Then we did another game.  One student offered a sentence of a story.  The next student added a sentence.  The next student had to add another sentence.  We went around the room several times until we came to a stopping point.  We did this a couple times and then we reflected on how it went.  Students talked about how it was more interesting when they built on what had been said instead of when they tried to undo what had been said.

Then we talked about what discussion in class might look like if we tried to follow and build on what one another were saying instead of negating what the other person said or changing the topic.  Halfway through the semester when discussion started falling off, I reminded students of these games and asked whether they were doing what was required to keep the discussion alive.

I don’t want to say these exercises solved the problem, but they gave students a concrete experience of engaging one another on terms that became mutually set as they engaged.  If I were to do it again, I think I might ask students to reflect more often on whether their discussion practices were furthering thinking, whether they were building on one another or not.  I sometimes had students who were just resistant to what was being said and I think asking those students to think about how they were advancing conversation might help them rethink what successful discussion looks like beyond asking your classmates to explain things to you.

Tags: discussion
From: Pedagogy
← I Marched, But Not for the Polls
Teaching through Encouragement →
No comments yet