I Marched, But Not for the Polls 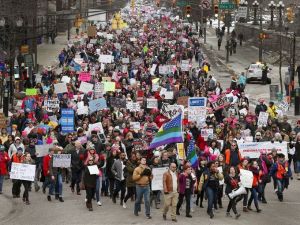 When I started writing this post, I wasn’t going to go to the march.  But I started thinking about the post that went up yesterday about purity.  I realized you know, it is pretty easy to find lots of reasons not to do things and then be very consistent and kind of useless in terms of doing something in the world.  As my post yesterday suggested, purity in the politics might be the enemy of doing any g–d— thing at all.  Then I realized that some of my friends were going and that they had made posters that were not at all about winning at the polls, so I thought, maybe we can go, and be a part of shifting the conversation.  And you know what they say in organizing efforts, you gotta go where the people are.

I am wary of political organizing whose aim is not really to change the political order.  Any political organizing that is trying to motivate people to resist by voting is doing very little to really try to change the normal order of things.  I am not saying that people shouldn’t try to vote out Republicans in November.  They should.  However, I am not here for that effort if Democrats are just going to be a cleaned up version of militaristic imperialism and corporate underwriting.  For example,

I am less interested in voting for Democrats than I am in forcing Democrats to be different than Republicans.  Lots of people seem so captured by the notion that the Democrats are the ResistanceTM that they will fail to force Democrats to offer real alternatives, alternatives that would appeal to both poor urban Black Americans and poor rural white Americans in a way that makes the case that they share interests and could be a real collective force of resistance.  Such an approach would require Democrats to abandon their efforts to appeal to well-off whites, or at least not to prioritize them.

These concerns that voting at polls, and specifically, voting for Democrats, would not serve the needs of the most marginalized and in need of our support were articulated in a statement by BlackLivesMatterCincy’s “The Women’s March is Not Feminism” which also made me think participating in the march might not be the best thing to do.  The statement explained that BLM Cincy had advised the theme be “Hear Our Voice” not “Hear Our Vote.”  They write:

The Women’s March is a gathering and a display of power, but it is also a poorly veiled campaign to elect more Democrats to “resist Trump.” The main demand being made of marchers is to register to vote and the “take back the polls.” We believe this is the weakest demand possible and the tacked on broader demands have little meaning when the main message is to “pull a lever.” The main demand not only disenfranchises countless black women and women of color, but also totally misses the point of women’s liberation. Everyone in the United States does not have a vote – whether because of immigration status, age, prior criminal convictions, access to official identification, transportation issues – but everyone does have a voice. Even if all women could vote, the electoral system does not let anyone vote their way to liberation from oppression.

The problem, they explain, is that

BlackLivesMatterCincy clarify their position in a follow-up post, where they argue that the problem with “Hear Our Vote” is the “narrow focus of the prescribed method to fight back.”  Their argument is convincing. It shows how limited is the view that our liberation can be achieved through the vote, not just in terms of a narrow view but a narrow group of people who might be able to have their needs adequately addressed through voting.

People standing in a crowd, backs face the camera. A handwritten sign reads, “If You’re Not Happy Change it, Vote.”

I was also pretty unmotivated to go when I saw a tweet inviting police officers to volunteer to do security for the march, which pointed to the way that organizers were unaware of how police officers are not considered the keepers of security for all women.  But then that tweet was deleted and in its place came information about peacekeepers who would keep an eye out for police abuses.  It looked like the organizers had been called to account and had listened.  Not perfect–they should have been more thoughtful about it from the outset–but small steps of progress.  At the event yesterday, volunteer “peacekeepers” in orange vests lined the march route instead of police officers, though some police officers on horseback were at the State Capitol where the march stopped.

I decided to go partly because I’m trying to resist my drive toward purity and I think doing something is worthwhile.  Last year, I went to the march right around the time I was reading Jodi Dean’s Crowds and Party, and I think she’s on to something interesting about how the crowd can be the site of something new and important.

Despite the first police tweet, and the sometimes Naptown character of Indianapolis, the organizers of the Women’s March did some work to make the march inclusive.  A whole slew of speakers pointed to the importance of defending the rights of trans* men and women, of trusting and following Black women, and of defending the whole scope of issues involved in insuring health care for all and reproductive justice.  The rally was emceed by Indy10 BlackLivesMatter folks and #dontsleep, a related organization for racial justice.  The three main speakers were from Indy10 Black Lives Matter, Planned Parenthood, and Spencer Pride (Indiana rural LGBTQ* organization in Spencer, between Terre Haute and Bloomington).  A number of speakers highlighted the centrality of environmental protections for water and air quality especially in our poorer communities.

As I feared there were plenty of scolding admonitions to get to the polls.  I was chagrined by the one speaker who said, after telling everyone to get to the polls this year, “Did you learn your lesson from 2016?”  The implication is that voters, not a lackluster effort from Democrats to offer real alternatives, were responsible for the election of Donald Trump, and for Republican control of the House and Senate.  This line allows Democrats to do more of the same and to run on being “not them” instead of having strong alternatives that change the system for being for the sake of a rising GDP rather than for the fulfilled lives of those the economic and social system leaves behind.

That was disappointing.  Also disappointing was the well-meaning signs that hadn’t quite thought through their claims.  Like this sign that reaffirms the gender binary and ignores the many complexities of chromosomes and sex.

Most hilarious of all and evidence of just how true it is that the Russia investigation is red-baiting was this flag.  As the person I live with said, I thought our side was supposed to be the smart ones. 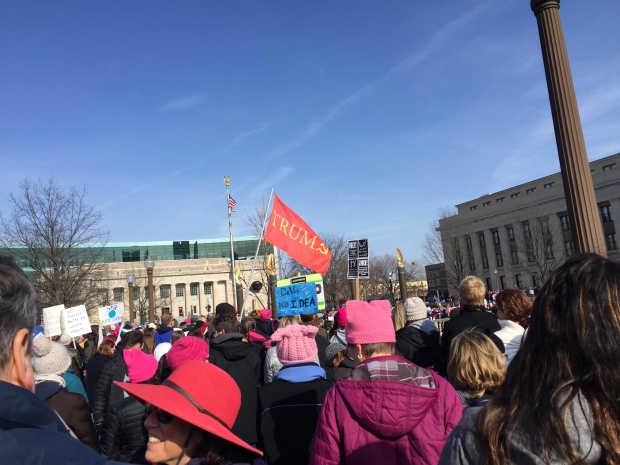 Flag flying in the middle of a crowd. Red flag with yellow letters that read T R U M and then the hammer and sickle standing in for the P.

The crowd did not quite have the energizing anger and determination that last year’s crowd did.  People seem beat down.  Any enthusiasm that is there seems to be in the possibilities of local work: a woman from Indy10 Black Lives Matter called out the crowd for remaining silent about the death of Aaron Bailey and the crowd loudly supported calls for hate crimes legislation to protect gay and trans* folks in Indiana.  I had the pleasure of meeting up with the #MuncieResist folks and listening in to their conversations about what they are doing to work for candidates and to hold them accountable.  It wasn’t perfect by a long shot, but the march showcased the litany of issues that we need to address and the possibilities for change, yes, too often they were reduced to getting to the polls, but many speakers drew attention to specific state legislation that needed to be supported or defeated and local actions for things like defeating efforts to build new prisons and changing housing policies to protect the homeless.

While I joke about the ResistanceTM I think the one speaker who said that we have spent the year building a movement was right, at least in the context of Indiana–more people are involved, more people are working together for common cause, more people are starting or joining organizations to hold officials accountable and to try to change policy and practices on the ground than have been in a long time.  That’ll have to do while we work on perfection.