A Stoic Reading of Aristotle 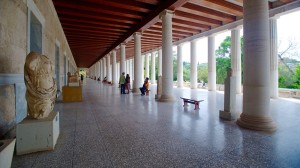 Last semester, I ended the last three weeks of my ancient philosophy course on the Stoics.  I began the course with Aristotle’s first line from the Metaphysics, “All men by nature desire to know.”  The entire course unpacked this sentence and its multiple possibilities.  What does it mean for nature to direct our desire to know?  How is human nature a matter of knowing?  How does knowledge function as a measure of ourselves and of the world?  How does knowledge depend on desire?  To what extent and in what ways are we responsible for becoming who we are, for fulfilling or not fulfilling our nature?  I was happily surprised to find the Stoics a fitting conclusion to these conversations, especially because of the way they think of the order of nature itself as fate, and human virtue as a matter of affirming this order or fate.

The Stoics offered a new possibility for understanding Aristotle’s famous opening line in a way that shows the intimacy between nature, fate and freedom or responsibility for the Greeks.  This intimacy is something that is very difficult for Aristotle to separate.  The Stoics were students of Zeno of Citium but they were clearly drawing from both Plato and Aristotle.  It isn’t much of a stretch then to offer a Stoic interpretation of Aristotle’s anthropology and ethics.  When Aristotle says that all men by nature desire to know, the Stoic interpretation would be that human beings fit into the order of the cosmos as knowing beings.  They fulfill that order when they fulfill their nature as knowing beings.  They are responsible to become the kinds of beings who affirm the order of the cosmos.  Human virtue consists in managing the pains and pleasures of the world so that they do not detract but support their role in the order of the cosmos.  Human vice is giving in to impulses that detract from the order of the cosmos.  Aristotle describes choice as that which leads to actions wherein our desire is guided by reason.  Choosing is affirming the rational order of what is.

As Arendt notes in her volume of the Life of the Mind, “Willing,” Aristotle describes as accidental all those things that may or may not be.  Human action seems then to be the realm of the accidental; it is certainly not the realm of the necessary.  As the classical philologist Bruno Snell writes, the Greeks did not even have a word for the will.  Against the voluntaristic notion that the world offered options that human beings determined, the Greeks recognized the contingency even of the human action, that it did not spring sui generis from human beings self-determining capacities but from a host of accidents.  As Arendt argues, the Greeks thought within a cyclical notion of time where Being was eternal and hence, everything returns from what preceded.  It is only with Christian thinking that we get a sense of beginning, Arendt argues, which carries with it a sense that human beings independently begin things outside of the order of the natural world.  Aristotle’s sense of voluntary then is not so much that the human determined it and was wholly responsible as that the human was in full possession of her physical and mental capacities.  But this view in no way placed the human outside the order of nature or the order of the cosmos.

Spinoza argues that human beings think we are free because we are conscious of our actions but unconscious of the causes and so we take ourselves to be the causes (Ethics IIIp2).  The Stoic reading of Aristotle seems consistent with this account: to be human is to understand and affirm the causes of our action as the nature of the cosmos.  On this account, we trace the source of our action to ourselves, but without taking ourselves outside of the order of nature.  Human virtue affirms the action that accords with nature, rather than seeing action as something that we must produce out of nothing, where the ethical situation that we confront is itself presented as requiring an affirmation of the order of the cosmos.

This Stoic reading of Aristotle does not suggest with Leibniz that this is the best world possible, that whatever is is consistent with the order of the cosmos.  Human impulse makes the world out of joint.  If it is human nature to desire to know then affirming the order of nature, which is to say, fate, requires seeking after that order and becoming aligned with it.  This alignment involves understanding the human being and action as part of that order, dependent on that order, rather than independent, above or outside of it.  It involves recognizing clearly what is in your control–the action–and what is not–the outcome, which depends on the order of nature, which is another word for fate, but not in the sense of what is determined, but in the sense of what happens according to the order of things.

I’m interested in the possible Stoic reading of Aristotle because I have long thought that Aristotle’s ethical and political thought follows from an attempt to think in response to tragedy as much as it is to think in response to Plato.  In tragedy, we find human beings accept the punishment for actions they were fated to do in order to win for themselves responsibility for actions that might have been externally caused.  By suffering, they claimed to have been the cause.  Tragedians opened a space between human action as the entertainment for the gods, where humans were the playthings of gods for their entertainment to a space in which human beings struggled to take own their actions.  Fate still dictated their action in these accounts, but the human actors could suffer to win responsibility after the fact.  Oedipus Rex is the best example of this struggle.

Aristotle replaces the gods with nature and still strives to find the place for human freedom and responsibility within a course that is set by nature.  Generation itself is outside of our responsibility and yet in the course of it, we take over the principle of being that makes us independent from what generates us.  This tension between being dependent and responsible is what Aristotle is trying to think in his biological and practical treatises.  The Stoics give us one way to understand that Aristotelian project against those who think Aristotle is at odds with those later thinkers from Spinoza to Nietzsche who take up the Stoic project.

Tags: Aristotle, nature, Stoics
From: Ancient Philosophy, Philosophy
← A Year of Hot Yoga
The Case for Lecturing More: Sharing Our Insights to Motivate Insight →
No comments yet