By some lucky happenstance (grace?) I finished reading David Graeber’s Debt: The First 5,000 Years and Marilynne Robinson’s latest novel Lila in the same week.  In his book, which is discussed at length in this seminar at Crooked Timber, Graeber attempts to establish that human relationships are not reducible to and do not originate in economies of credit and debt.  Graeber argues, as I have long thought, that Nietzsche’s exercise in taking the calculability of all human relations to its logical conclusions in his Second Essay in On the Genealogy of Morals is not meant to defend but to mock such a schema.  Graeber points out that there is something insulting about considering your relationships with others in terms of debt.  To consider a relationship one of debt suggests a calculability to it, a way of measuring what is owed, a way of holding one another responsible because of the IOU between you.  When I was in junior high and high school, my mother did not like us getting rides from our friends’ parents because she felt like that obligated her to give rides to our friends.  She didn’t like giving rides.  Fine.*  I think about Aristotle talking about how friendship is the opportunity to exhibit virtue to others, to have someone to be generous to.  But still, human relationships are always in excess of debt, irreducible to what is owed, made obscene by the sense that it is merely the keeping of obligations and demanding that they be met (this is likely why I’m not a Kantian).**  It is this element of human relationships that Graeber calls communistic.

The surest way to know that one is in the presence of
communistic relations is that not only are no accounts taken, but it would be considered offensive, or simply bizarre, to even consider doing so (99).

Were you to calculate what you owe your father and to try to write a check to pay it off, paying off that debt would well-nigh end the relationship altogether.  You couldn’t calculate the debt to your mother–she gave you life.  It is because we recognize the debt as incalculable that we have to find a different way to organize the relationship in order for it to work, a

way that does not calculate credits and debts.

All this brings me to Marilynne Robinson’s latest novel Lila.  This is the last in the Gilead series, which includes Gilead and Home.  Gilead introduces us to John Ames and John Boughton and their families.  Gilead is a letter Ames writes to his young son with the expectation that he (Ames) is not long for this world.  Home is about the Boughton family.  Lila is about Ames’ wife and written from her point of view.  Each novel is about grace (see this Atlantic review), but this one seems to be more surrendered to the difficulties of grace.

Reading Lila alongside Debt made me think that grace is not what I had been raised to believe–the settling of debts.  Grace is the name for the capacity to have relationships that do not calculate.  Grace is a sense of freedom from not having to keep up the calculations.  It is in this sense that grace is scandalous.  (This is probably why I cried all the way through Home–on a plane–and for the first 100 pages of Lila.  I think there is a real sense of joy and relief in the possibility of relationships without calculation.)

In Lila a grace that refuses calculation emerges in a way that operates, I think, as a challenge to the Calvinists of my youth who would make grace a feeling that comes from the recognition of debt.  On this account of Calvinism, the more you can calculate your sins the more you can experience grace.  The focus is thus again and again on the debt.  But the grace of Robinson’s books doesn’t make that much sense.  It’s not calculable.  And it’s the challenge to refuse to calculate throughout the series that is put to the protagonists.  Or in this last book, the challenge posed by the protagonist.

As a young neglected child, she is rescued from squalor by a woman who raises her and educates her and takes her on the road in the Depression-era Midwest.  The woman and their fellow travelers did some bad things to stay fed and free and to keep Lila’s family from finding her, and Lila is haunted by questions of their fate.  Lila herself does some bad things too, vaguely hinted at, but she is more concerned with her companions than the implications of her own dark deeds.

She meant to do better by him.  He was always kind to her.  But she felt strange in the church.  And the night before, lying beside him in the dark, she had asked him a question about China.  He tried to explain and she tried to understand.  He said, “I believe in the grace of God.  For me, that is where all these questions end.  Why it’s pointless to ask them.”  But he seemed to be telling her that Boughton might be right, that souls could be lost forever because of things they did not know, or understand or believe.  He didn’t like to say it, he had to try different words for it. So she knew he thought it might be true.  Doll probably didn’t know she had an immortal soul.  It was nothing she ever mentioned, if she ever thought about it.  She probably wouldn’t even have known the words for it.  All these people out there walking the roads all those years, hardly a one of them remembering the Sabbath.  Who would know what day of the week it was? Who wouldn’t take work when there was work to be done?  What use was there in calling a day by a certain name, or thinking of it as anything but weather?  They knew what time of the year it was when the timothy bloomed, when the birds were fledging.  They knew it was morning when the sun came up. What more was there to know?  If Doll was going to be lost forever, Lila wanted to be right there with her, holding to the skirt of her dress. (21)

Lila then tries to go wash the baptism of herself.  One thing this passage made me think about was the notion of whether and how grace could be immanent.  It’s not a question of saving your immortal soul, but a way of thinking about the inability of the past to fully capture the present.  The inability of all the debts and credits to calculate the present situation.

Later in the book, Ames reads to Lila from a sermon he is working on:

Things happen for reasons that are hidden from us, utterly hidden for as long as we think they must proceed from what has come before, our guilt or our deserving, rather than coming to us from a future that God in his freedom offers to us…Life on earth is difficult and grave, and marvelous.  Our experience is fragmentary.  Its parts don’t add up.  They don’t even belong in the same calculation.  Sometimes it is hard to believe they are all parts of one thing.  Nothing makes sense until we understand that experience does not accumulate like money, or memory, or like years and frailties.  Instead, it is presented to us by a God who is not under any obligation to the past except in His eternal, freely given constancy. (223)

Robinson insists on the transcendence of this situation–grace comes from God.  But what if grace is this idea that human relationships, unlike physics, and by contrast to a story about human interaction told by economics and 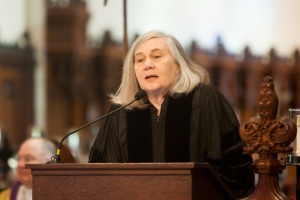 psychology and some versions of history, cannot be comprehended by what went before?  The calculations of mechanics are insufficient  for human interaction.  Some Calvinists would say that the only possibility of transcending that debt calculation is some divine intervention.  But I think that is a matter of having accepted too thoroughly the capitalist view that human beings act out of rational self-interest and their relationships are calculated and calculable.  It is not the case that human relations are only able to transcend calculability through the divine.

I think Lila depicts a struggle with that question.  Ames sees it that way.  But Lila’s earliest memory is of an interruption in a life that Robinson describes as dark and cold and miserable, crying with no one to hear.  The change in her path from out of nowhere (the recurring image of paths–first mentioned on page one–throughout the novel points the sense in which grace seems to be this possibility of a wholly different road from the one you are on) was brought about by Doll who never spoke of God the way Ames does, but brought interruption and freedom to Lila’s life.

Lila tells Ames he should marry her one day as they walk down a dirt road in Gilead.  He agrees that yes he should.  They do.  Lila gets pregnant and by the end of the book has a child.  Lila’s arrival in Gilead is out of nowhere.  Her meeting and marriage to Ames is too.  The old man having the child, none of it followed from what went before.  It is a wholly and other form of life than what had been for both of them.  Ames had lost a wife and child in childbirth.  Lila had her misery on the road.

At the very end of the novel, Robinson writes:

Most of the time she thought she understood things better when she didn’t try.  Things happen the way they do.  Why was a foolish question.  In a song a note follows the one before because it is that song and not another one.  Once, she and Mellie tried to count up all the songs they knew.  How could there be so many? Because every one was just itself.  It was eternity that let her think this way.  In eternity people’s lives could be altogether what they were and had been, not just the worst things they ever did, or the best things either.

This passage points to a kind of amor fati of acceptance that allows things to be this way because they are without any particular reason.  It’s because they lack reason that they seem to come from grace.  And yet here again, Robinson points to this external view, the view of eternity.  Is it only the case that people’s lives are not counted by the worst and best things because we have the view of eternity?  Or is it rather, that we stop the counting up, the calculating, that judges people in terms of what they owe and what is owed to them?  To think about life in terms of debt and credit makes us think when we do well that it is based on our merit.  When we do poorly, it is based on our failings.  How differently the world would look if we gave up on our ledgers.

*There’s a hint of control and fear of being controlled that is real behind my mother’s concern not to be obligated.

**We’ll see, maybe I’ll change my mind after I teach Susan Moller Okin’s Justice, Gender, and the Family next week.  I do wonder, though, if we do a disservice to Plato when we think he was advocating that justice is giving to each what is owed instead of seeing Plato responding to a world in which the market was taking over.  It’s an aristocratic critique, and so to the extent that it seems critical of egalitarianism problematic.  But it’s also a critique, as Graeber discuses, that money is the true measure of man.