Day 10: Sicario and the Rule of Law 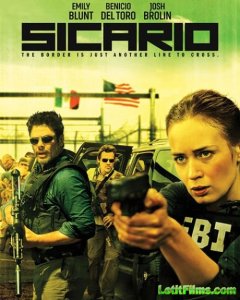 Last night I saw the film Sicario, directed by Denis Villeneuve and written by Taylor Sheridan. All I knew about it was that it starred Josh Brolin, Benecio Del Toro and Emily Blunt. This film is the rare example of a film that you don’t really know what it is about until the last half hour, because you don’t really know what is motivating various decisions and what the goals of the various characters are. I mean you do kinda, but you don’t. You know it is about the American government’s effort to fight the drug cartels whose violence has spread into the United States. You know that they are trying to track down a particular head of a drug cartel. (Some spoilers ahead.) This motivation is depicted in the first scene where Kate Macer (Emily Blunt) leads a FBI investigation that winds up at a house full of dead bodies. Macer and her partner Reggie Wayne (Daniel Kaluuya), lawyer turned FBI agent, are called in to a meeting of a task force whose provenance is not obvious. Macer is chosen to join the task force, while Wayne is not – they don’t want a lawyer. That line seemed irrelevant at the moment, but as I said, it isn’t clear what the film is about. The film proceeds with Macer and the viewer trying to figure out what the task force is doing and questioning the legality of it, scene to scene, tactic by tactic. She thinks Matt Graver (Josh Brolin), the head of the task force, is CIA and that he is operating in domestically illegally. The more dangerous concern is that the man of unknown provenance accompanying the task force played by Benecio del Toro is actually along to do the dirty work to “eliminate” leaders within the cartel. Macer learns that she is along on the trip because the CIA can work domestically in the US when they are accompanied by another agency who operates within the US.  But also they go into Mexico and do things that the DEA isn’t really authorized to do in Mexico.  As the tagline says, “The border is just another line to cross.”Macer  realizes that she is there to render legitimate all the activity she observes that appears to skirt the law. At the very end, Del Toro’s character asks her to sign a document affirming that all elements of the operation were above board. At gunpoint. She says she can’t, but eventually does. Del Toro’s character tells her to get out of this business because it is for wolves and she is not a wolf. No, she’s a woman. (He doesn’t say that, but that’s the gist.  Only men are man enough to break the law but not break the law.)

The difficulty in figuring out what is happening and why in the film reflects the difficulty in following accounts of the US interventions in the drug war in Central and South America. I’m reminded of Philip Mirowski’s discussion of mid-twentieth century neoliberalisms and how they fostered complicated and conflicting descriptions of economic crises at home and abroad to make it difficult for anyone to easily follow who was in the wrong. The film seems to illustrate this point. The announced reasons don’t make enough sense to motivate the project. The actual reasons run counter to US law. But the actual reasons don’t even seem to make sense and are not even known to the higher officials approving the op.

Even more telling about the current situation of US power at home and abroad is the way that justifications of government action in terms of ‘legality’ don’t actually hold much water. In the aughts, we talked all the time about the state of exception—the way the sovereign could repeal the law and assert itself in the face of threats to the general order. On these terms, we could point to how the sovereign was operating outside of the law and the dispute was over whether and how this was justifiable. By acknowledging that the sovereign was operating outside the law, there was at least a point of critique, a way of showing that the guise of rule of law did not hold up, critiques which were meant to drive the government back into the confines of the rule of law. If points of resistance to the state of exception worked (if they worked) by challenging the constitutionality of the state of exception, which amounted to questioning to what extent the sovereign could assert its exception and claim to operate under the rule of law, the movie shows how sovereign power has erased the challenge of whether it is working under the rule of law by making the law powerless.  Any action can be shown to be legal if you orchestrate it correctly.

If various protections are meant to be operating in the law to prevent the CIA from working domestically, for example, requiring other agencies to be involved, an agent who does not understand what is happening, an agent who is left out of the loop, a woman agent who thinks she is included because she ran a bad-ass op, but is actually included because she has no power to resist, becomes the stooge who makes the operation legal. Early on Josh Brolin says they don’t want the lawyer. By then end, you realize why. But it wouldn’t matter. They follow the law. Sure, Macer only signs the document saying everything happened on the regular under gunpoint, but she signed it. The argument can no longer be that the state is operating under the state of exception, that it’s laws are not legal and that is a problem. The law is followed. Nothing illegal was ever done. This seems so much worse. The rule of law appears to be re-instated, but the laws don’t do the work. What do you call that form of government that has a façade of law with none of its teeth?

Tags: Sicario
From: Television and Movies
← Day 9: Reflections on the Public Philosophy Panel at the APA
Day 11: Teaching To and Through Blogging →
2 Comments Post a comment