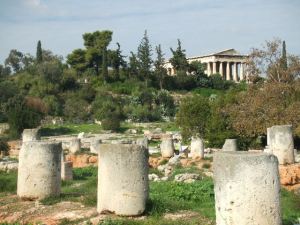 Whenever I find myself growing grim about the mouth; whenever it is a damp, drizzly November in my soul; whenever I find myself involuntarily pausing before coffin warehouses, and bringing up the rear of every funeral I meet; and especially whenever my hypos get such an upper hand of me, that it requires a strong moral principle to prevent me from deliberately stepping into the street, and methodically knocking people’s hats off – then, I account it high time to get to sea as soon as I can. Melville, Moby Dick

On Monday, I get to sea.  I am traveling to Greece for five weeks.  First, a week in Athens and then south to Nafplio where most of June will be spent.  Brief forays to Delphi, Corinth, Mycenae and Sparta will interrupt writing work all thanks to funds from the Byron K. Trippet Assistant Professorship that I hold at Wabash College.

I have begun working on a project on materiality in Aristotle and I am hoping to think more broadly about what I take to be a deeply inextricable tie in the Greek experience of the world laid out before us between what through Aristotle we have come to divide into the principles of material and form.  I’ll be paying particularly close attention to the play between landscape and architecture in the temples that honor various gods to think about how the understanding of the different gods is illuminated in that dance as well as to think the fluidity of physis and technê, nature and artifice, between the work of the heavens and the earth and the work of the humans. That will be the space in which I am preparing to be inspired.

During the weeks, I will be working on an essay criticizing Hannah Arendt’s reading of Aristotle while using Arendt’s conceptions of praxis and energeia to support my case that the polis for Aristotle is natural and formed in action, an argument that responds to Jussi Backman’s essay on Arendt’s critique of Aristotle and Dana Villa’s reading of Arendt on Aristotle.  I will be presenting this paper at the end of the summer at the Society for Greek Political Thought portion of the American Political Science Association.

I like to work on two projects at once so that my procrastinating doing the one can translate into actual work on another project, so I will also be developing a paper that I have given several times called, “Not Slavery, But Salvation: Aristotle on Government and Constitutions.” I recently posted on Rousseau and Aristotle highlighting some of my thoughts for that project.

I’m going to try to post every other day or so from now until we return, so stay tuned.  Next post: Historia of History of Athens