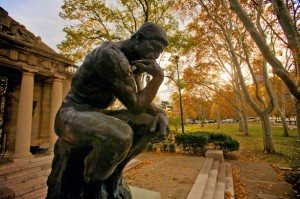 I spent the last two days attending the Faculty Workshop on Democracy and Civic Engagement at Wabash that was organized and facilitated mostly by members of the Rhetoric Department at Wabash.  It’s been glorious to slow down and take some time to think about the teaching we spend so much time doing, so I’m feeling rejuvenated and enthusiastic about planning for civic engagement components in the classroom.  One issue that kept recurring for me was the tension between, or at least, the question of whether there is a tension between, thinking and acting.  Plato and Aristotle both distinguish between actions you do for themselves and actions you do for some end outside of themselves, and they argue that actions that you do for themselves are better than actions you do for some product or goal beyond the action. I found myself concerned that measuring the success of a course in terms of some action that might come of it beyond the thinking that takes place within it privileges action and makes thinking instrumental to action.  This dispute reaches back to the ancients.  In Politics VII.3, Aristotle remarks that some people think that politics is a better life than philosophy because they think that politics is action but philosophy is not.  Aristotle accepts the view that a life of action is better than a life of inaction, but he rejects the idea that philosophy is not action in itself.

Socrates himself is changed by his own recognition that he does not know, a knowledge that provokes him to pursue a life in pursuit of wisdom, a life itself that is a way of living and changing his world.  I always thought it striking in his Apology that Plato has Socrates go to three groups of people in Athens who he thinks might know, groups that each of his accusers represents, to see if they do know–the public men, the poets and the craftsmen.  With each of them, Socrates realizes that they do not know what they thought they knew, but with the public men, Socrates lingers to try to get them to recognize that they do not know.  Why?  Because he thinks such understanding and thinking will change the way they live in the world just as it changes Socrates.

My conversations with my colleagues affirmed for me that there is a dialectical relationship here between thinking and acting.  But I think we tend to understand that dialectic as still being a matter of changing the way we think about something.  That we learn to think differently or more carefully about something and that leads us to act differently, and the acting in the world can then better help us understand and think about the world.  But I’m very wary about how that might become a matter of application–that thinking is not successful until it has been properly applied.  I’d like to suggest rather that thinking about concepts can change us in a way that does not need application, and that measuring whether certain pedagogy is civically engaged in terms of whether something other than the thinking comes of it might be indicative of a world that wants products out of education, rather than the education for itself.  My colleague, Jill Lamberton, put it well when she suggested that if democracy can’t function without well-educated citizens, our concern with thinking and teaching thinking produces well-educated citizens.

Hannah Arendt writes in the Introduction to The Life of the Mind of the problematic absence of thinking from daily life.  She asks:

Could the activity of thinking as such, the habit of examining whatever happens to come to pass or to attract attention, regardless of results and specific content, could this activity be among the conditions that make men abstain from evil-doing or even actually “condition” them against it?  (The very word “con-science,” at any rate, points in this direction insofar as it means “to know with and by myself,” a kind of knowledge that is actualized in every thinking process.)

And later in the same Introduction:

If, as I suggested before, the ability to tell right from wrong should turn out to have anything to do with the ability to think, then we must be able to “demand” its exercise from every sane person, no matter how erudite or ignorant, intelligent or stupid, he may happen to be.  Kant–in this respect almost alone among the philosophers–was much bothered by the common opinion that philosophy is only for the few, precisely because of its moral implications, and he once observed that “stupidity is caused by a wicked heart.”  This is not true: absence of thought is not stupidity; it can be found in highly intelligent people, and a wicked heart is not its cause; it is probably the other way round, that wickedness may be caused by absence of thought.

Some colleagues pushed me a bit and asked whether what I was still seeking was a thinking that led to better action, so the thinking was important but still nonetheless produced an action beyond it that judged it to be worthwhile.  I think holding this distinction so strongly is what supports widely-held critical views of the “ivory tower” of the academy to which philosophers are perhaps guilty of, themselves wanting to maintain this distinction in order to be allowed to think unencumbered by any connection to action.  Perhaps this is why, as Chris Long recently commented on Eric Schliessser’s blogpost about the recent dustup over a reporter live tweeting a lecture by Martha Nussbaum, philosophers are uncomfortable with being public–it exemplifies the sense in which thinking can be acting if that means that it does something.  It is this way that thinking does something that I want to support as being acting and not merely instrumental for acting.

My own story is instructive here, I think.   Before I came to graduate school, I was involved in the election campaigns of Sen. Rick Santorum (R-PA) and Pres. George W. Bush in 2000.  As a native of Philadelphia, I cared very much about urban issues, but I thought that Republicans had better answers to those questions because human beings were basically greedy, so markets could offer solutions and that individuals pre-existed community.  Reading Plato and Hegel in graduate school changed my thinking, but it didn’t just change my mind.  Reading these thinkers, made me think.  Plato and Hegel made me realize I hadn’t been thinking.  I’m not saying that only those who are thinking will come to agree with me.  But I do think that those who are thinking and not ideological will have a harder time being dogmatic and that such a position changes their way of being in the world.  On this point, I’m with Socrates.