Ramp Hollow: Tragedy of the Commons ≠ Justification of Enclosure 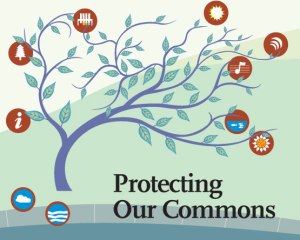 Somewhere along the way, the concept of “Tragedy of the Commons” has become an argument in defense of enclosure and private property.  The term first came into use by British economist William Forster Lloyd in 1833 to argue that unregulated grazing on public land could destroy the land, but it has largely entered public discourse through sustainability advocates to describe the situation of what happens when public resources such as rivers are unrestricted, everyone fishes them, and the ecosystems that fostered the fishing are destroyed. Open to everyone, people act to deplete the resources for everyone.  The argument of the tragedy of the commons has been used to justify restricting access to fishing and hunting in order to protect the common lands, not unlike the kinds of decisions people have been making about the commons for hundreds and hundreds of years.

Students have come to think that “tragedy of the commons” means that only what is held in private is properly managed.  It’s not just students, though.  This kind of argument has been put forth as the public justification for privatizing public services and utilities including the U.S. mail service as if the resources will only be well-managed when they are managed for a profit.  On that point, there is little evidence.  This reading misunderstands “the commons” as that which is unregulated and open to anyone, instead as that which serves the whole community.  The whole community is invested in regulating and facilitating the protection of the commons when it is the source of sustenance for the whole community.  The case for how this works has been made by 2009 Nobel Prize Laureate in Economic Sciences Elinor Ostrom.

The problem for those who use what they call “the tragedy of the commons” to advocate for enclosing common lands and services is that “the commons” that aims to sustain all those who access it is not made to produce further value as private property turned into capital does.  Being poorly managed is code for not producing further value, which is to say, not contributing to the capitalist economy.

Stoll makes a strong case that the people in Appalachia became poor because of policies and projects that aimed to enclose the commons on which they sustained themselves.  By sustaining themselves on these commons, the people could live as they liked.  The Whiskey Tax as well as forced agreements to sell their land to coal companies resulted in losing their commons and forcing them into the capitalist economy as laborers.  One thing that is striking about the account is how they were able to be independent by treating the land not as private property in the service of producing surplus, but as a commons that allowed them to live.  The commons allowed them to be independent of the wider economy and the drive to capital development further east.  As Stoll writes in his proposal for a return to living off the commons, “[W]hen people take care of landscapes, landscapes take care of them” (272).

How did it work?  As Stoll explains it, private property as we understand it today–alienable parcels that can exchange hands without regard to use–did not exist before the sixteenth century.  Land existed as a commons under a series of rules and customs that determined who could use it, what could be done with it and for how long.  The commons was a set of resources that was controlled by a group.  It was not a free for all, but regulated by the group.  Both the nobles and the peasants adhered by the agreed upon customs.  Lords might charge a symbolic fee–what they called a peppercorn rent–just to reinforce the social hierarchy, but they allowed the people to use the land, even as they were required to protect the land.  People used the land for subsistence and organized it by creating regions for collective hunting, for gathering and for cultivation.  In a later post, I’ll talk about how the use of the land for sustenance is transformed into a land for the production of value.  But as long as the land could be treated as a commons, the land could be used to meet their needs for living in a way that also allowed for leisure.  The shared commons allowed them to be independent from any overlord–corporation, coal company, or politician.

Insofar as the shared commons produced independence of the mountaineers in Appalachia, it was a threat to a growing capitalist economy.  The strong language used against them for resenting having their commons taken out from under them reflects similar language Silvia Federici recalls for the women who resisted the enclosure of their commons.  The enduring trend of referring to the people of Appalachia as uncivilized, degenerate, illiterate, uncouth, superstitious, familiar with the devil, points to how people continue to resent the resistance of the people in Appalachia to being incorporated into the national economy.  And the threat of the independence of those with a shared commons might explain why aspersions continue to be cast against the very idea that people could flourish in such a situation.

Tags: Ramp Hollow, Steven Stoll, tragedy of the commons
From: Politics, Public Philosophy
← Stop Selling Me: Exercising without Consuming
Ramp Hollow: Taxation and the Enforcement of Capitalism →
One Comment Post a comment