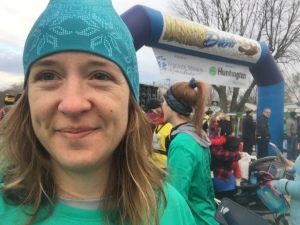 This post originally appeared on Fit is a Feminist Issue and is crossposted with permission.

The strange algorithms of Facebook brought Sam B’s post from several years ago–“Am I really lapping people on the couch?”–to my feed last week.  People like to talk about their athletic efforts and workout regimes in terms of how they are doing better than other people.  At the yoga studio where I practice they regularly say at the end of class, “You did more in the last hour than most people will do this entire day.”  This sentiment  suggests that I did something worthwhile because it was better than what other people are doing.

But I hesitate to just blame my fellow athletes for thinking about our physical efforts in this way.  This way of thinking is exercising under neoliberalism.  If liberalism underwrites capitalism through the idea that individuals bear responsibility for their position in the world and private property requires the protection of the government, resistance to liberalism came from workers organizing for their rights against the ownership class.  Neoliberalism demands that workers be considered as individuals, not as a collective with shared interests.  If labor opposed capital under liberalism by arguing that labor is the source of wealth production, under neoliberalism workers themselves are viewed as human capital, and as human capital, of being responsible for their own precarious situation that being workers puts them in.  As human capital, the workers bear their own risks.  Under liberalism, workers could demand that working conditions be improved to protect them because they argued that their well-being was necessary for wealth production.  Under neoliberalism, workers are made responsible for the conditions.

Consider for example what happens when taxi drivers become Uber drivers.  As taxi drivers, they could be on the same side with one another against the owners, collectively resisting for the sake of better pay, better conditions, health care coverage.  As Uber drivers, they appear more independent as owners but as owners all the risk falls to them. They are compelled to compete with one another rather than to collectively support one another for their joint success.

The competition of human capital is not to be more productive, as much as it is to show that they are worthy investments.  Precarious workers who should recognize that they have a collective interest are pit against one another in the drive to accumulate more assets that make them appear to be a better investment than their fellow equally precarious workers.  It’s difficult to see whether anyone is doing anything anymore for its own sake given how everything seems like it can become translated into an asset that makes one a better investment.  A pedagogy workshop I attended several years ago suggested that people could be encouraged to engage in various projects if we could promise them an online badge that could accompany their social media presence to identify them as someone who had done that project.  This is education under neoliberalism: doing more work without compensation just to show up as having invested in oneself and so being worth investing in.

This brings me back to the way we talk about working out and the way we are motivated to work out.  I like to talk about working out on social media—on a cold day, I’m proud of myself for running outside.  I find new forms of exercise interesting to my body. It makes me think of Spinoza saying, “We do not yet know what a body can do.”  That’s what I think when I’m in the middle of a Bikram yoga class in a 105ºF room at 40% humidity.  My friends are known to mock my regular mention of my running—“beepboopbeep.” I do talk about it a lot.  And I am competitive.  I think of it as competing with myself: to get out there on a cold day, to stay in the hot room for the whole class.  I literally cried in the last half mile of the Indianapolis’ Women’s Half Marathon a couple years ago when I realized I was going to beat my target pace.  I cried.

Under neoliberalism, we are motivated to direct the competitiveness to others.  Once we concede that we are human capital it is hard to escape this drive to accrue assets to ourselves and to show ourselves to be managing them well.  This is why the competition language works.  When I hear at yoga that I should leave the studio and be the best that I can be (alongside the contradictory assertion, “Whatever you are is always enough”), I recognize that these injunctions to be my best work because I occupy an insecure position as human capital (and even though my position is pretty secure, neoliberalism constantly drives to produce insecurity out of apparently secured positions).  The slow runner claims she is lapping the person on the couch because she needs to show that she is investing in herself better than someone else is.  Human capital’s affirmations are always negations of competitors.  Under neoliberalism, the exercising subject is human capital pit against other exercising subjects.

For this reason, I hesitate to blame the slow runner who is happy to lap the person on the couch.  I don’t want her to find her running worthwhile only because she is beating someone.  I want her to be fine with running slowly.  I want her to enjoy the running if she enjoys it and not to run if she is only doing so because she needs to show she is better human capital.  I understand the bind she is in.  And more, I don’t think she is the cause of the anxiety of the person on the couch. Both of them find themselves pit against one another in the drive to be a better investment.  The break from neoliberal human capital requires a general refusal to try to show up as a better investment and collective support and resistance against systems and policies that make us each worthy only by comparison.

Adriel M. Trott is an associate professor of philosophy at Wabash College.  She specializes in ancient and continental philosophy and feminist theory.  She lives in Indianapolis, IN and is trying to only work out when she feels like it.