Political Nihilism and the Rise of Koch Libertarianism 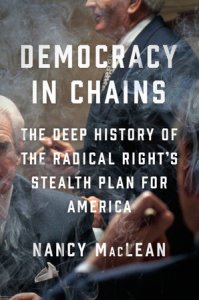 One thing that strikes me from Nancy MacLean’s Democracy in Chains: The Deep History of the Radical Right’s Stealth Plan for America is the way that James Buchanan and the Kochs and their cadre worked to cultivate in people a sense of political nihilism and self-interest in order to make their “stealth plan for America” more feasible.  It came as a surprise to me that people have not always thought about politicians as self-interested actors but as civil servants, since, as a child of the Reagan Revolution, I was raised to think about government as something I should be suspicious of.  The suspicion, MacLean makes clear, is not just of government’s capacity to work for public interest, but of the motives of those who work for public interest.  MacLean documents how “public choice theory” as developed by James Buchanan encouraged people to think of politicians as self-interested where their interest is chiefly to be re-elected.  The problem the “radical right” faced was how to achieve their tax-free dream when politicians, driven by their self-interested, supported efforts of historically powerless groups to achieve equality through government support and protection of labor, education, and the environment.  By casting these groups as “special interests” and politicians as concerned with their own selfish ends, rather than the good of the community, Buchanan and the Kochs and their team were able to shift the views of the average American from the general respect of government and its capacities, and a general recognition that historical inequalities had to be put right, to seeing politicians as untrustworthy and those seeking rectification for wrongs as undemocratic leaches of the public purse.

My work has long been focused on how changing people’s conception of political life can change the way we live together and pursue justice.  MacLean makes a strong case for how the way people think about government today was part of an ongoing project that threatens democratic governance and makes corporate special interests the chief beneficiaries of this suspicion.  In so doing, she opens the possibility that people could think otherwise.

The nihilism that MacLean describes, where no one can be trusted to act for the sake of what is right or just, extends beyond politicians to two other areas in ways that make it especially difficult for us to have a sense of a shared community, a shared view of even of what is true or good for the community.  As MacLean shows, environmentalists and scientists who raise concerns about global warning were cast by these folks as self-interested, ironically by people who were being heavily paid by the Kochs to cast such aspersions of self-interest.  A recent study of the 3% of studies that maintain that climate change is false shows that these studies all select for their results in ways that are themselves suspicious.  The view that scientists themselves gain from these arguments contributes to the sense that no one can be trusted to speak the truth, that everyone has an agenda.  Raising the specter of doubt around science has had more far-reaching consequences that just failure to act on climate change, though that would certainly be bad enough on its own.  One can trace the anti-vaxxers, for example, to this same skepticism.

Education is the third sphere into which the “radical right” has infused skepticism of motives, as if public school teachers and bureaucrats are making anywhere near the kind of money that the heads of corporations who want to run the privatized schools do.  This skepticism of public school teachers that suggests that they aim to indoctrinate school children and should not be trusted is far-reaching.  But MacLean argues that the roots of the project to cast suspicion on educators comes from resistance to desegregation in the Virginia following Brown V. Board of Education.  More recent efforts to shrink public funding for education depend on the arguments that government cannot be trusted to do anything well, and ultimately, that government officials are concerned only with their own well-being.  Little evidence that privately run schools with less regulation do better drove these arguments, and that evidence remains scarce (though if you search google for this information your first hits will be from Koch funded sources–the Heritage Foundation–or the University of Chicago).  As MacLean argues, the evidence does not matter for those who do not want the government to offer any public services at all, including ensuring education for all children and consumer protections of basic utilities.

MacLean’s book offers an account of a now familiar strategy: produce conditions in which you can justify policy because of how people act within those conditions.  Then argue that people act that way according to nature, ignoring or hiding the ways that you produced those conditions that you now call natural.  Then say that those conditions must be secured and further perpetuated because they are necessary because of human nature.  The ways that people act within those conditions now having been naturalized.  Human beings are selfish so we need a system that depends for its success on people being selfish.  Government needs to be limited because politicians are self-interested, though you have motivated their self-interest by describing them in this way that makes possible contenders and their constituents think this is the case until it comes to be the case in which case their selfishness must be limited.  To break the hold of this “natural” order of things, we need to resist the nihilism about political life, about science and about public education that have become legitimate–in the case of politicians almost clichéd–positions in public discourse.