I just returned from a weekend camping at McCormick’s Creek State Park in Owen County, Indiana.  The first night was likely the hottest and most humid night of the summer.  The second night it rained and thundered.  It was likely the weekend with the worst weather of the summer.  Still, we had a good time.  This trip was the first time we went camping in Indiana, and so first time at McCormick’s Creek.  I wished I had had some of this information before going and was surprised that I couldn’t find some of this online.

So first, the primitive campsites are quite decent.  There are pretty regular water pumps around the loop.  The best sites seem to me to be the farthest ones on the outside of the ring, furthest south on the map (213, 214, 215, 218).  The sound carries through the ring pretty easily and quiet hours are not really enforced.  It was difficult for me to sleep because I could hear people talking late — like until 2 or later.  Sites from 190-202 are on the paved road and might be more exposed to noise from cars but seem more isolated from one another.  There is an outhouse on the top of the ring.  I read that there are showers at the electric sites, but I couldn’t see that on the map and didn’t go looking (there are showers at the pool, which you have to pay $3 to enter, but the entry fee lasts for the whole day and you can come and go).  Some sites do say that the bathrooms at the electric ring have showers, so I guess you could drive over.

Saturday we went on two hikes.  The first was a fairly easy two-mile hike – Trail 5.  The camp brochure rated it “moderate,” and that’s probably right.  A half mile in we came to a cave.  It looked like just an opening in the side of the ground.  But then a group of about eight kids start emerging from the cave.  So I realized that the cave is a tunnel that goes through to the other side.  It’s a famous cave in Indiana–Wolf Cave.  Wolf Cave is about a quarter mile long and it is low and narrow and at the very end you have to crawl to get out.  I was glad to be in there alone.  I was glad the kids had already come out when I went in because it would have been claustrophobic to encounter them in the middle of the cave.  I had to breathe deeply and think if little kids could do it, so could I.  It was about hip width through much of it, and I kept worrying it would narrow even more and I’d have to crawl to get through, but I didn’t have to crawl until the end when it got low and not so much narrow.  I had never been in a cave like that and I wasn’t even really aware it was there. 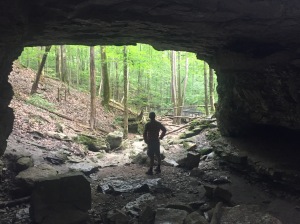 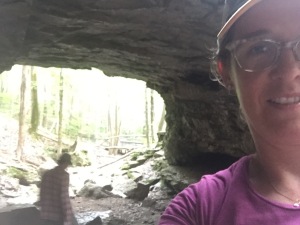 We went for a swim to cool off and then to the Nature Center, which I recommend, not only because it is well air-conditioned.  There are nice exhibits about rock formation, fossils and geological time.  And oh, live snakes and water turtles.  Then we went on another hike after lunch – Trail 3.  The camp brochure rated it “rugged.”  And I’ll admit, we mocked that notion for the first quarter mile or so, up until the point where we reached the bottom of the stairs.  Then it was, well, rugged.  The path follows the creek and it’s steep in some places, and in others requires climbing up rock and under fallen trees.  But it’s beautiful.  It ends just a little before the Canyon waterfall, for which the Canyon Inn on the grounds of the park is named.  Walk up the path to look down on the waterfall or walk straight ahead to walk right into it.

Firewood is on sale in the recreation center / campstore near the Canyon Inn – the map also says there is a campstore by the pool, but it’s more like a canteen.  I don’t think it has firewood.  There are two kinds of firewood–hardwood and slabwood.  The slabwood catches quickly but burns fast.  The hardwood does not catch easily.  It burns slowly, and I can tell you, it stayed burning through several hours of rain.  The slabwood is on sale for less at Babb’s Superstore in Spencer, West on 46 (right out of the park gate), but FYI–they don’t sell alcohol.  Unlike PA state parks, you can drink in the campgrounds in Indiana state parks.  On the other hand, unlike in PA, they really do not want you scavenging for firewood in the campground.  I am not saying I did, but hypothetically, if one were to collect kindling wood to start the fire, hypothetically, no one would say anything.

We made ourselves delicious food over the campfire–I made campfire muffins in orange rinds in the coals for breakfast.  We made grilled chicken, potatoes and corn the first night and steak, vegetables and corn the second night.  It was nice to sit in the rain and talk, and to eavesdrop on our neighboring campers fights, but we definitely need a tarp and other ways to resist the rain.  And by all means, don’t go camping in Indiana on the hottest and rainiest weekend of the summer.

Photograph at the top is off the Canyon waterfall from the Trail 3 overlook.

Tags: Indiana, McCormick's Creek State Park
From: The Great Outdoors, Travel
← Power and the Pursuit of Justice
Freedom, Fate, and Being Human: From Aeschylus to Marzano-Lesnevich →
No comments yet