Buying a House: The Lives of Things 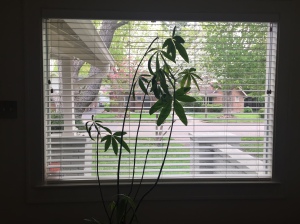 It’s been awhile since I’ve blogged in this series.  We closed on our house on May 3 and moved in Memorial Day weekend 2016, so this is the first spring in the house.  I am on sabbatical, so this spring, I’ve been getting up every morning, making coffee, and sitting in the dining room, gazing out the front window.  In the transition from winter to spring, the front room has become the bright, green space that sold us on the house.

I’ve never been a “lives of things” kind of philosopher.  I mean, I work on concepts of nature and I think about the ways that concepts like nature can be border markers for who or what is relevant to political and ethical questions.  But the idea that things could have lives, that they could reveal themselves, that they could have ways of resisting and conceding is not a view to which I really give my credence.  And yet, the newness of the house in springtime is making me think about the lives of things.  It’s not a different house in the springtime–I mean, it’s the same materials–and yet, it really really is a different house.

I never knew that the front tree blooms in white flowers on the right side and pink flowers on the left side.  I feel like I’m moving the plants in the living room on a sundial across the room to follow the newly discovered light.  Different rooms hold the spring air differently than others.  Different rooms feel cozier in this season than in winter.

I’ve become interested in the house as a surprise, as a thing that is not fully transparent to me.  I am working on a project on Aristotle’s biology.  One argument I am making is that material both maintains its material elemental nature and is transformed in generation, which suggests that material has its own character even as the materials that are potentially this being are transformed when they are actualized into the being.  The wood becomes a house, and is no longer the timber it once was, and yet, in being wood, with the capacities particular to wood, it shrinks and expands.  The house breathes.

I’ve been thinking about this in natural substances, and I usually am dismissive of the analogies to artifacts for all the problems of the idea of a form that comes into material and gives it meaning, but living in this house that I am for the first time invested in its flourishing, makes me think differently about it.  I tend to think that we have to do the work to make the house continue to be what it is.  I get anxious worrying about the way that it is decaying, which seems like a concern for the material.  The maintenance of the structure depends on the strength and support of the material in order to maintain its arrangement.  In both natural and artificial things, the form, whether internal to the substance or in the mind of the builder, has to keep working on the thing to guard against decay.  But I wonder how much control we really have over the form of artificial things.  I wonder if the house is not continuing to work on itself in some way.

If form is the way that a thing reveals itself to the world, then surely, the house does not reveal itself to be other than a house, but this house reveals itself to be other than the way this house was this house three months ago.  It isn’t the disintegrating material that enables this revelation, but a different relationship to the outside: the air and the sun and the temperature.  And you know, that does seem to change the form.  In springtime, the house seems more porous, less of a shelter against the world and more of a place that invites in the outside.

Tags: Home-Buying
From: Personal
← The Political Subject and Identity Politics: Reading Dean’s Crowds and Party
S*Town is S* →
No comments yet