Today I saw the retrospective of Vik Muniz‘s work at the IU art gallery.  This in between reports about refugees being turned away from airports around the country and people gathering at these airports to resist the executive order that led to this turn of events.  Muniz’s art is appropriate for this moment.  It seems appropriate to begin with a recreation of Goya’s Saturn Devouring His Son.  It is made from the trash from Jardim Gramacho, the garbage dump on the outskirts of Rio de Janeiro where Muniz employed catadores or garbage pickers to select pieces of garbage for his work, which he then sold to support their community. There’s a documentary that was on PBS following Muniz as he made this series–Waste Land.

Muniz is a Brazilian artist who uses unusual material for recreating famous works of art.  Muniz himself notes that his material is more ordinary than the materials that create paint have traditionally been–he uses peanut butter and jelly to recreate Mona Lisa, for example, GI Joe plastic toys to recreate famous photographs, recovered trash to recreate paintings, torn up postcards to recreate photographs of the youngest person to be executed by the electric chair.  His work makes the ordinary extraordinary, and shows the way that high art has become part of the backdrop of our everyday lives.  He says he relies on a “poster store iconography.”  Working with big canvases, Muniz produces work that up close make the materials very apparent and far away show, as he himself explains in documentary film in the exhibit, the mind of someone else.  Somewhere in between is a moment of a threshold where the ordinary materials manifest the mind of an artist.  One of the themes of Muniz’s work is how the camera can change the way that we see.  I found a number of times that big pieces did not come into focus to me until I took a picture of them, as with Old Cheyenne and Guernica.  Now is the time for changing the way that we see.

This piece is made with hair.

This is George Stinney, Jr., who was executed at 14 years old after a hasty trial. The portrait is comprised of photographs of other people living their lives to point to the possibilities cut short. 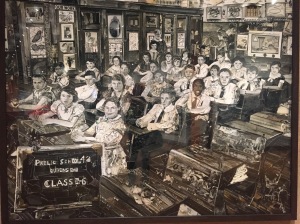 This is another piece composed of photographs of others. It points to how public schooling forms a generation from the investments of many other people and many other lives. 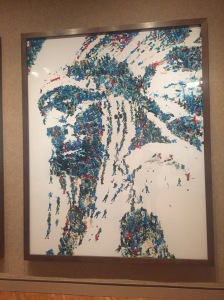 This piece is Old Cheyenne. It is made of different colored GI Joe men — the kids toys. It’s hard to see what it is close up, but when I took a photograph of it, it came together. Which eerily testified to the idea that the camera helps us to see what we need to see when the camera isn’t there. 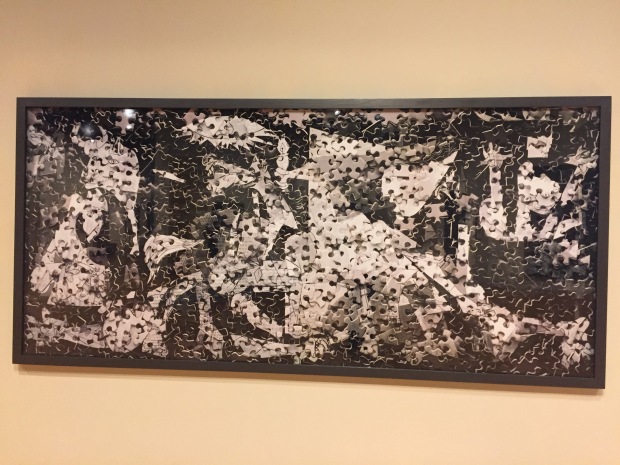 Guernica after Picasso made from puzzle pieces.