What is Public Philosophy? 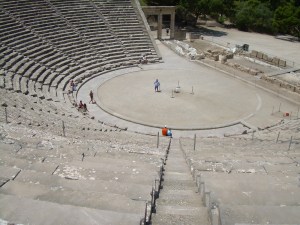 Yesterday, Leigh Johnson posted at The Philosophers’ Cocoon in their “Real Jobs in Philosophy” series.  She says something in the piece that brought me up short (honestly, she often does that).  You should go read the whole thing; I want to focus on this one passage, the one under the heading “Research”:

I don’t get much time to do extended, concentrated, article-generating research—see above—though I am slowly realizing that I have exponentially more time for research, broadly-speaking, than I did at my previous position. That’s partly a consequence of not being buried in departmental business and new preps and the TT grind, but more so because I’m older now and I think about research much differently. I read a lot more and write (mostly digitally) a lot more than I used to, I do a lot of collaborative work, and I have more time to engage interests and concerns that are not primarily aimed at turning out peer-reviewed publications. I do some sort of research every day.

Johnson says she does some form of research everyday, but this research is not focused on peer-reviewed publications and it’s mostly digital.  I’m going to go out on a limb and speak for the philosophical community when I say that philosophers generally don’t think that our digital work is research.  Further on the limb, we don’t think this work is research, not only because we tend to think that whatever is meant for public consumption can’t be that good, but also because we tend to think public philosophy is either popularizing philosophical concepts developed in the quiet corners of the ivory tower or applying these same concepts to some relevant area of public life.  Both popularizing and applying tend to be viewed as not as rigorous philosophy, not really philosophy itself but a possible use for philosophy.*  When Johnson says she does some sort of research every day and that this research is not aiming toward peer-review academic publication, she seems to be saying that her public philosophy is itself the production of philosophical ideas, not just the application of those ideas to contemporary issues.

Last week I was speaking at the University of North Carolina, Charlotte on my latest project on Aristotle and Material as informed by debates over the history of the meaning of sex and sexual difference.  The philosophy department at UNCC has a masters-level graduate program in “Ethics and Applied Philosophy.”  But the program is remarkable for its investment in developing theory from particular situations and experiences as UNCC philosophy faculty Andrea Pitts discusses in her recent interview with Political Philosop-her and Robin James exemplifies in her recent book (which I discuss in my last post).  These philosophers are not just applying philosophy, but thinking out of the specificity of lived experience.

The problem is that philosophy as a field tends to think that theorizing out of a moment isn’t really philosophical–it’s sociology, or anthropology, feminist theory or postcolonial theory, or it’s activism.  Continental philosophy has long been saying that metaphysical, epistemological and ontological claims hide political investments (this is not to say that there are no continental philosophers who remain unaware and unwilling to address the political investments of their projects borne out of affirming a certain kind of universality to their work).  The connection between metaphysical and epistemological claims and the politics and ethics they underwrite is acknowledged more and more in analytic philosophy, too.  But far too many philosophers throughout the field think you have to do “real” philosophy before you can take it to the street.

That paper I gave at UNCC is about how a historical investment in a binary view of gender contributed to a hypostatization of the principles of form and matter in Aristotle’s natural philosophy, even though the workings of form and matter in these texts in Aristotle are much less easily divided.  By looking at the historical desire to support a particular (binary asymmetrical) view of gender, we can show how a certain metaphysics was pursued, and further, how emptying the metaphysics of that political aspect, allows the metaphysics to function in an apparently innocent but more pernicious mode that fosters the gender inequality that maps on to this metaphysics.  In this way, my work on Aristotle theorizes out of this current moment, which I view as historically informed, for better or for worse, by a certain reception of Aristotle’s thinking.

I don’t mean to say that applying philosophical ideas to public concerns is not important.  But I do want to say that public philosophy can often be the development of theory and not just it’s application.  When Johnson says she does some form of research everyday, but this research is not focused on an academic audience, we philosophers have to reconsider what we think research means in order to affirm this conception of research.

**Unfortunately, while I think that people with no formal philosophical training are already philosophizing, the formal structure of philosophy can work to rob them of any desire to philosophize when it seems either difficult for difficulty’s sake or mere mind games.

Image is of the theater at Epidauros.