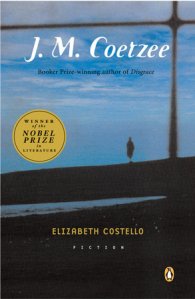 I just finished reading Elizabeth Costello, by J.M. Coetzee.  The novel–is it really a novel?–is a series of addresses by a fictitious Australian author, Elizabeth Costello, framed by her interactions with her son, fellow authors, her sister and finally, a Benjaminian before-the-law type last chapter, and a prologue with a possibly fictitious letter.  I’m writing this without reading anything else about the book because I want to keep working on my own sense of what the novel is about.  I am not yet sure.  But I think it is about something important, maybe about something only a novel can say, or rather, something a novel can best trouble.

The speeches and discussion cover some recurring themes of the last fifty or 75 years of literary theory and continental philosophy: the (in)difference between animal, human and god; the author’s responsibility to the reader, the ethics of analogies, the possibility of forbidden knowledge, the novelist’s role as conduit, reporter, truth-teller, the question of humanism and whether and how it is bankrupt, the “monster of reason,” the role and meaning of beauty, the status of the novel, the status of the author.

Coetzee uses a fictional author but also refers to real people who wrote novels in a way that causes the reader to wonder which authors are real–to the extent that I started looking up every author Coetzee mentioned.  I’ve also been reading Helen King’s work on Hippocrates for my research project on Aristotle’s biology.  King traces the ways that commenters on the Hippocratic corpus speak about which texts are more authentic and how the authorship should be understood in light of apparent contradictions.  For King, this investment in authorship is an investment in saying which texts matter more, a way of saying this is the truer text, the one that most represents the view of Hippocrates, because of it’s author.  King thinks this strategy is not about figuring out what the texts mean and how they work but about appealing to authority.  By intermingling fictional authors with existing authors, Coetzee causes the reader to wonder why some claims are taken as more authoritative because of the status of their author and for no other reason.  It isn’t clear what Coetzee’s own position is and Coetzee seems to be purposefully poking at his reader’s desire to know.

My husband gave me the book for Christmas, which was cool because Coetzee has a special place in our relationship.  When we were first dating, a South African friend of ours and I got into an extended argument over Waiting for the Barbarians. I maintained that the novel was universalizable, that it could be about any colonizing power.  He maintained that, no, it was specifically about South Africa and one had to know South Africa to really understand what is happening in the novel.  My husband maintained that it was both.  Daniel Webster he likes to call himself.

In Elizabeth Costello, Coetzee has Costello speak about the difficulty of actually making up a world that is not the real world and yet at the same time, “to understand human fate one case at a time, to understand how it comes about that some fellow being, having started at point A and having undergone experiences B and C and D, ends up at point Z.  Like history, the novel is thus an exercise in making the past coherent.”  Coetzee seems to think Daniel Webster is right if we take Elizabeth’s account for Coetzee’s, but I’m not sure that we should in a novel that spends so much time challenging the reader’s desire to know which view is most authoritative, which is the real author’s view.

Another theme is the distinction between the animal, the human, and the gods.  Costello recalls Kafka’s story of the ape who must try to pass as a human and then she says that she hopes that she does not have to persuade the audience that she is one of them, no, she is one of them.  But then:

For all we know, the speaker may not “really” be an ape, may be simply a human being like ourselves deluded into thing himself an ape, or a human being presenting himself, with heavy irony, for rhetorical purposes, as an ape.

Later, in another speech, she asks how we can tell between the humans and the animals.  She speaks of the Nazis who became beasts in the way they treated their fellow humans.  The problem, Costello argues, is that the people in the countryside around the camps failed to empathize, they failed to see themselves on the trains, just like we fail to see ourselves in the slaughterhouses.  We decide in advance that they are not us.  And, Costello argues, this makes us beastly.

In the dinner conversation that follows with a character Coetzee names Dean Arendt, recalling Hannah Arendt’s distinction between zôê or bare life and bios or human life, Costello wonders how the lack of consciousness in animals justifies using them for our own ends.  Another person at the table points to how this line of reasoning does not stand with regard to babies, so this shows that the discussion of consciosuness is a smokescreen.  Really, we all just want to protect our own kind.  At bottom, we are just animals.  We invent the gods to justify this slaughter.

Last summer, I read Derrida’s The Beast and Sovereign lectures and I found Derrida’s project of deconstructing the apparently easy distinctions between beasts and human beings and gods throughout this novel.  For the sovereign to be sovereign, he must become beastly.  To claim the power over other living beings because we are superior makes us beastly.  To claim to be gods of others makes us less than human.  The line is not there, we invent it over and over. 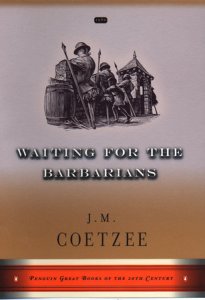 But I couldn’t help thinking that the discussion of the novelist as a creator and the novelist responsibility was connected to this fear of what the gods can do, of how acting like gods in relation to others makes us beasts.  Is the novelist somehow
acting like a god among men, creating worlds, presenting us, possibly, and Costello thinks unethically, with dark evil pain that we should not look upon?

In the last chapter of the novel, Costello finds herself in a before-the-law like situation in some strange town where she is asked to report her beliefs.  Here she speaks about herself as a novelist as necessarily above belief.  Here was another place where I thought she sounded like a god who creates, who has no need for belief.  And yet, and yet, by this far into the book, it seems of course she has beliefs.  In her second tribunal, she writes:

Her mind, when she is truly herself, appears to pass from one belief to the next, pausing, balancing, then moving on.

(That is not unlike how I have feel trying to blog everyday.)  After musing over whether and how we can and we try to distinguish ourselves from the animals, and the need to be able to situate ourselves in the place of the other, those who are so other they are called animals and not humans, Costello finds herself other.

We change from day to day, and we also stay the same.  No I, no you is more fundamental than any other.  You might as well ask which is the true Elizabeth Costello: the one who made the first statement or the one who made the second.  My answer is, both are true.  Both.  And neither.  I am an other.  Pardon me for resorting to words that are not my own, but I cannot improve on them.  You have the wrong person before you.  If you think you have the right person you have the wrong person.  The wrong Elizabeth Costello.’

Here the author issues, the novelist responsibilities and the impossibility of the definition that will protect us by ensuring that we can see who is with us and who is not, making sure that everyone who ought to be on the one side of the line is there, are all addressed.  At the end, in front of the tribunal, the reader recalls the discussion of Kafka and the ape trying to pass itself off as one of the audience.  Here is Costello in that situation again.  What does it mean that in her inconsistency, she is the wrong person?

In the end of this chapter, Costello asks if she has a chance of passing through the gate.  We all have a chance, she is told.  But she wonders whether her position as a writer will make it more difficult.  No one can say.  I couldn’t help but think that the  final description of the place before the law echoes the colony at the edge of the barbarians:

She has a vision of the gate, the far side of the gate, the side she is denied.  At the foot of the gate, blocking the way, lies stretch out a dog, an old dog, his lion-coloured hide scarred from innumerable manglings.  His eyes are closed, he is resting, snoozing.  Beyond him is nothing but a desert of sand and stone, to infinity.

The barbarians and the gods in the place beyond.  What are we waiting for?