“Divergent” Subjects: The Individual Against the Collective 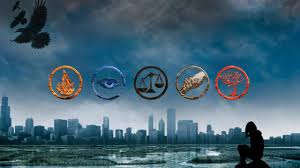 Last weekend, I finally watched Divergent.  Last semester, I kept telling students in my Plato’s Republic seminar that someone needed to get on the film version of the dialogue.  It just seems so cinematically rich.  I mean, I know people have made films that are treatments of the cave analogy, but I want the thriller that is the dialogue as a whole.

Halfway through the semester a student told me I needed to see Divergent because it depicted Plato’s Republic.  Let’s just bracket that this film fails as a depiction because any successful film of the dialogue would have to find a way to perform the narrative encapsulation of the dialogue–Socrates narrating the story of the conversation that follows, the argumentative set up to the city in light of the question of whether justice is advantageous.  If Divergent depicts the Republic, it does so because it depicts a community in which people are divided into classes on the basis of their natures and these classes do the different tasks needed for the city to flourish.  Erudite seeks knowledge, Dauntless defends the city, Amity farm peacefully at the outskirts of the city, Candor speaks the truth, and Abnegation feed the poor and rule the city.  The film, which is based on the novel of the same name by Veronica Roth, gets traction from the problem that not everyone easily fits into one category, because you know, they’re divergent!  Like Hunger Games, a story that sets itself up as a revolutionary tale of resistance against oppression, Divergent ends up serving the same neoliberal practically Ayn-Randian celebration of individualism against collective action.  In this film, the collective becomes a problem because it attempts to limit and narrowly define individuals, while individuals succeed only when they work independently of the collective in order to resist it.

Jodi Dean argues in an article in Political Theory published in December for an account of subjectivity that breaks with Althusser’s critique of individuality.  As Dean argues, for Althusser, ideology produces the individual as the bearer of freedom, of agency, and of property, and in this way, as the political subject.  Dean argues that Althusser’s position, in its attempt to critique the bourgeois ideology of the individual, leaves us without subjectivity all together.  While Althusser claims that “ideology represents the imaginary relationship of individuals to their real conditions of existence,” Dean writes that “What is imaginary is that the conditions ideology organizes relate primarily to the singular person of an individual” (6).  From Dean:

Reversing Althusser’s formulation [of ideology interpellating the individual as subject] so as to understand ideology as interpellating the subject as an individual provides another option: the subject emerges where ideology fails because the subject is collective.  When Bourgeois ideology fails, individuation fails and the fact of collectivity impresses itself.  A problem faced by one becomes a condition shared by many.  Correspondingly, the subject is a gap in the structure because the people are the subject of politics.  “Subject” is therefore not primarily a linguistic site of individual freedom, decision, or choice.  Nor does it index the unconscious fantasies that fill in and direct the never complete structure.  Rather, subject is a gap in three other intertwined senses: the structure’s inability to ground or posit itself, its dependence on something external to it, and the torsion of the Real in the excess of its self-relation.  In their self-relating, the people always come up against themselves.  They encounter the practical, material limits of their association, the psychic and affective pressures of their commonality, and the effects of histories of conflict and conquest.  The excess of their reflective relation to themselves as the people, or, as I term it here, between the collectivity and the common people or people-in-common, is the torsion of politics.  Politics takes place in the non-identity, gap, or torsion between people and their self-governance.  Political subjectification involves forcing this non-identity, making it felt as an effect of a subject.  As Bruno Bosteels puts in in a discussion of Alain Badiou, “subject consists in the coherence of a forced lack.”  Not just any gap is that of the subject; subject appears as the active occupation of the constitutive lack in the people. (10)

That politics is in this gap is found in both Badiou and Ranciere’s work, as I argue here.  With these thinkers, Dean cautions against dismissing the subject simply because it has been cast as the individual and suggests that we reclaim the subject as collective, ecstatic and open.

So the crisis in Divergent comes because the main character, Beatrice “Tris” Prior, has the skills of each of the groups that comprise the city, and as such she perceived as a threat because she doesn’t fit into the system.  Against those who have carefully orchestrated as system that will “work,” Tris and her new beau Four, fight to be who they really are–complex, multifaceted, real human beings.  That all sounds really good, right?  But this plot carries the fantasies that interpellate the individual, rather than the collective, as the subject.  Ewan Morrison describes the problem in The Guardian as pitting human nature against the always stifling machinations of political life:

Books such as The Giver, Divergent and the Hunger Games trilogy are, whether intentionally or not, substantial attacks on many of the foundational projects and aims of the left: big government, the welfare state, progress, social planning and equality. They support one of the key ideologies that the left has been battling against for a century: the idea that human nature, rather than nurture, determines how we act and live. These books propose a laissez-faire existence, with heroic individuals who are guided by the innate forces of human nature against evil social planners.

The critique of human nurture turns out to be a critique of the collective.  We are supposed to resent the collective, to accept the fantasy that the collective limits us and our many talents rather than fosters them and us, but more to think that the only true actors are individuals.  The collective is not a subject that has agency but is only ever, with a nod to Aristotle, slavery, not salvation.  As Dean writes:

It is bourgeois ideology that treats conditions that are collective and social, embedded in histories of violence and systems of exploitation, as if they were relationships specific to an individual, as if states arose through individual consent, as if politics were a matter of individual choice, and as if desires and capacities, affects and will naturally originate from and reside in an individual form. (6)

Returning then to Plato, this analysis helps me diagnose better why students have such a hard time with Plato, and it makes me wonder whether this contemporary divergence between the individual and collective subject might not be traced back to the collective at the root of democracy in ancient Athens.  Thrasymachus, Adiemantus and Glaucon cannot see their subjectivity as collective, even as Socrates implores them to consider their advantage in the justice of the whole.  Just as Divergent stages the collective as a project in the service of some individuals, Thrasymachus’ charge that Socrates just wants to establish justice as advantageous so that he might rule continues to echo.  At the root of the charge is the failure to see that the collective could be the subject rather than serving some individual’s subjectivity.

(As a sidenote / afterthought, Jack Halberstam in “Animating Revolt, Revolting Animation,” in her book The Queer Art of Failure, locates this kind of collective subjectivity in Chicken Run.  Cartoons are the last bastion of the radical imaginary?  And it turns out, not even that has lasted.).