Georgia O’Keeffe at the Indianapolis Museum of Art 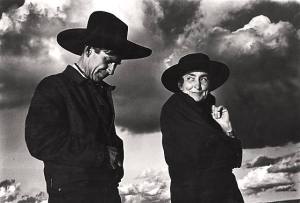 Yesterday, I went to the Georgia O’Keeffe exhibit at the IMA they’re calling “Georgia O’Keeffe and the Southwestern Still Life.”  The exhibit situates O’Keeffe among her contemporaries working in American art in the early to mid-20th century in the southwest.  O’Keeffe was an American woman painter when they were few women respected as painters in the US. The exhibit shows how O’Keeffe was influenced by the terroir, the architecture and the Spanish and indigenous cultural elements of the southwest.  By putting her alongside her peers, the exhibit shows how O’Keeffe was in dialogue with the abstractionists of the 20th century while maintaining her own voice (I was struck by the number of O’Keeffe’s peers who just painted guitars like Picasso).  There were three claims that the exhibit seems to make that I took issue with: 1.  that O’Keeffe’s work is not abstract; 2. that her bones are not about death; and 3. that her flowers are not sexual.

Each of these points is supported in part with O’Keeffe’s own words.  I’m troubled by the impulse to privilege the artist’s interpretation of her work.  I’m more troubled by the need to nail down once and for all what the works meant, the drive to exclude some meanings for the sake of others.  In some cases, I want to suggest that O’Keeffe appears to be messing with us when she speaks about her art.  In any case, the notion that some meaning cannot be found in the painting unless it was ‘put there’ requires a theory of art that suggests that art is meaningful through the conscious work of the artist.  Art then in the Greek sense is purely Apollonian, consciously meaningful, philosophical.  But if art is not just a tool of wisdom but a separate and significant domain wherein art is not just a product of conscious wisdom, but displaying the Dionysian, the madness, the unconscious frenzy that presents itself as a challenge to thought, then the artist is not the root of the meaning of the art work because the art work is controlled by neither the artist nor the philosopher.

I think each of these instances of O’Keeffe’s account of her work shows how the artist can speak under certain restrictions and expectations while the art remains powerful and forceful unimpeded by the artist’s apology of it.

So yes, there are some issues with the curation of this exhibit.  I was put off by the use of the term “Hispanic” to describe the influences in the Southwest.  The term collapses the Spanish and the indigenous influences in a way that eclipses the differences.  Yes, there are Spanish influences (adobe houses) and they could be noted separately from the Pueblo and Hopi and Navajo influences (pottery, textile and religious practices) with a little more careful work which we should expect from curators.  Calling American Indian practices Hispanic is troubling because it suggests that they are what they are from the Spanish influence and not that the Spanish has become affected by those it colonized.  If the practices and backgrounds are mestiza that too should and could be noted.  I should say though that while the audio tour was a bit simplistic, the segments that captured the impressions that visitors to the exhibit had in response to certain paintings were remarkably poetic and communicated the art’s force, particularly its capacity to hold conflicting notions together at once.  I particularly appreciated the responses to “Pelvis and the Distance,” which people called dreamlike and surreal and one museum goer said of it, “It makes me feel small and big at the same time.”

Tags: Georgia O'Keeffe, Indianapolis Musem of Art
From: Art
← Janus-Faced Part 2: Stuff I’d like to do in 2015
Undue Burdens: Abortion and Paternalism →
2 Comments Post a comment