From Athens to Philadelphia: The Return

We were supposed to get home on July 3, but we didn’t finally get here until yesterday because our flight was cancelled in Philadelphia.  I grew up in Philadelphia, and still have family there, so this wasn’t all bad.  We were able to push our flight back one more day so we could spend July Fourth with my brother, his wife and her family.  They live north of the city in farm country so it was nice to get out of the concrete jungle and see some grass after the unbearable heat of Athens.  They have neighbors who own a dairy farm who set off their own quite impressive firework show.  It wasn’t quite the Northern Liberty drug dealers show that I saw a couple years ago from a friend’s roof, but it was good.

It seems fitting that we were stuck in Philadelphia on our way back from Athens.  Philadelphians began to refer to themselves as the Athens of America in the 18th century because of the role of Philadelphia in fostering American art and culture.  Funny enough, Crawfordsville refers to itself as the Athens of Indiana, ostensibly for similar reasons, but I remain somewhat confused by that association.  A recent roundtable in Philadelphia discussed the association between Athens and Philadelphia.   A quick google scholar search on Athens and Philadelphia turns up a doctoral thesis on public space and democracy with case studies from Athens to Philadelphia.  And further history of Philadelphians effort to show themselves the true inheritors of Athens can be found here.  That website includes a poem by Philadelphia poet George Webb which includes this stanza:

Who (if the wishing Muse inspir’d does sing)
Shall Liberal Arts to such Perfection bring,
Europe shall mourn her ancient Fame declin’d,
And Philadelphia be the Athens of Mankind.

So Philadelphia wasn’t just trying to be the inheritor but the true Athens!  I guess we Philadelphians are more in league with the Germans as the colonizers of the idea of Greece, as I discuss here, than I thought.

So it was nice to have a couple days in Philadelphia, but it was also nice to have a little more time in Athens to go to the National Archaeological Museum.  We were there for two hours and we really just began to get a sense of it.  We could definitely have spent two hours a day there  for two or three more days.  I’m glad we went after we had been to Delphi and Mycenae and Epidauros and Nafplio and other points of interest because when we saw things we could situate them both geographically and historically to see the meaning and significance.  I’m not sure we would have got that sense of the meaning of things if we had gone there 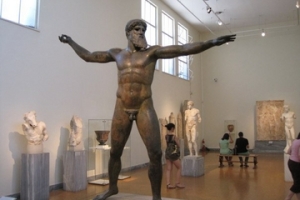 first.  What struck me most was how the transition from the Archaic sculpture to what they call “the severe style” to the Classical style, which depicts the body in movement in a realistic way, creates a clear line to the Renaissance.  Two sculptures in particular, the one found at Antikythera — a small island right near Kythera which we could see from Neapoli and which Antikythera is now politically under the same municipality as–which is pictured above and the sculpture of Zeus throwing a thunderbolt.  (We also learned in the museum that you should not go into the museum and pose next to a sculpture in the same pose because that is considered disrespectful to the ancient cultures who made these things.  We learned this vicariously, not because we were trying to pose like Zeus, which, we wonder, may be blasphemous.)

Both of these seemed very much akin to the Renaissance sculptors and it struck me that the Renaissance sculptors which trying to do something similar to what the Classical Greek sculptors were trying to do.  In an era of democracy in Athens, in a time of thinking of human capacity, both were depicting the power of human strength, even as they depicted gods as humans.  The tragedies seem to point directly to this clash and to the notion that human beings are strong and distinct and perhaps doomed, but somehow powerful.

One of our last days in Nafplio Jeff told me that he thinks this Greek problem of achieving the division of gods and mortals and beasts, the problem that the Greeks recognize as precarious and in need of extensive rituals and sacrifices to perform, might be the most important problem of our time, one that he wants to dedicate more time to thinking about — I’ll also be posting soon on how Bruno Latour has helped me think about this more in Aristotle.  If we have to work so hard to make these distinctions, we are led to wonder whether it is because the distinctions are so difficult to maintain.  In these sculptures, we see the sense that the human has power, yet is still animal flesh; the human has needs, but still reaches beyond, and this might be what is distinctive: that we wish to make these distinctions, to perform our separation from the beasts and to reach toward the gods.

Tags: Athens, Greece, Philadelphia
From: Personal, Travel
← The Theater at Epidauros
On Humans, Non-Humans and the Unity of Nature: Aristotle and Latour →
One Comment Post a comment