I’m up in the middle of the night suffering from jetlag listening to the local live band (no city in Crete ever seems to sleep) and a howling cat / dog / wolf in the caves in the rock cliff opposite the balcony of my room in Matala.  Oh wait, now that is definitely either a screaming baby on the cliff or a cat fight.  As I write, I see a shooting star.

Yesterday, we made our way from Heraklion south to Archanes alongside Mount Juktas, the rumored site of Zeus’s burial.  Then west to Zaros on the south side of Mount Ida, which is one of the rumored places of Zeus’s birth and early years (though we plan to see the actual site of his birth and rearing at Mount Diktaion in several days).  Beware the windy roads for those who must read maps while riding in a car with less than iron stomachs.

Zaros was recommended to us as a mountain town worth seeing.  It is.  Mount Ida rises in the background.  After we parked, I commented that it smelled like sheep and then immediately, as if responding to my call, I heard a sheep bleet.  Jeff was mistaken for a German (actually, both of us have been approached in German — two days ago in Heraklion, as I was waiting for Jeff, someone stopped and asked me if I spoke German and could give her directions.  Yes and no, it turns out.)  Zaros is full of shops with signs indicating that German is spoken there.  The town has that German forest town feel to it and one could see why Germans make an effort to visit.  The couple who spoke German to us recommended a restaurant called Synantisi.  Actually, we were looking for another restaurant when we stopped to speak to this couple and they told us this was the one to go to instead.  A woman and her fiance run the restaurant and they were generous and hospitable.  We had Cretan salad, beets and a Cretan dish called Stifado, which the woman recommended.  We sat across from the fresh mineral water fountain and realized that the sparkling water we have been drinking in Crete is all from Zaros.  The restaurant has an espresso machine (like most restaurants in Greece), so we had delicious espresso drinks after lunch. Then, when we thought we were finished and asked for the check, they brought us raki and ice cream from Moiros which was rich and creamy and amazing.  The restaurant is on the main road on the left about half way through town (pass the gas station on the right).  After lunch we walked up through the town and saw donkeys, hens, roosters, sheep and a goose.

From Zaros we came south and stopped at the archaeological site Phaistos (pictured below), which was the palace of Minos’ half brother Radamanthis.  It is much less “reconstructed” than Knossos, so it was neat to see the ruins more (or less, depending on your perspective) ruined.  Like Knossos, it had a similar labyrinthine design (more on labyrinths to come), a great hall that was something of a closed courtyard indicating that the palace order was something of a private order rather than a public one. 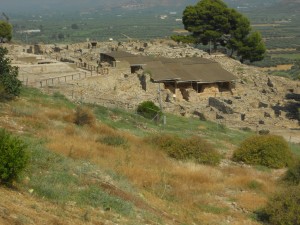 From Phaistos, we moved southeast to Matala (first picture) which is on Mesara Bay.  We stayed at Zafiria Hotel which is on the left as you enter the town.  The hotel is reasonably priced and has a beautiful pool at the base of cliffs, which like many of the cliffs in Matala are pocked by caves.  After sitting by the pool reading Derrida for awhile (oops, I said no philosophy in this post!), we walked over to the beach (about a five minute walk).  At the beach, you can pay €3 to climb up the rocks and into the caves, but we arrived too late (the entrance closes at 18:45, though the posted sign says 19:00).  We saw a herd (7 or 8) mountain goats making their way down the steep slopes of the cliff, and I was put in mind of Habakkuk 3:19, “The Lord God is my strength, and he will make my feet like hinds’ feet, and he will make me to walk upon mine high places.” 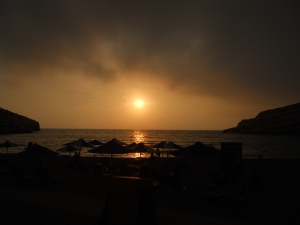 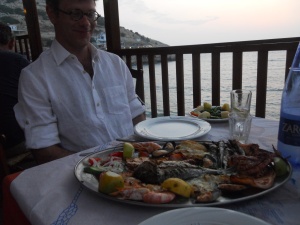 In Matala, we had an amazing meal of fish (fish platter for two for €28) at Sirtaki, as we watched the sun fade into the haze.  When we asked if the platter for two would be too much food, the waiter said, well, no, it’s fish.  I guess you can never be full on fresh fish.  For dessert, they brought us fresh loukoumades, watermelon and raki and the waiter shared a shot of raki with us when he came by to check on us.  Yiamas!

I wish we had longer here, but alas, there is more to see.